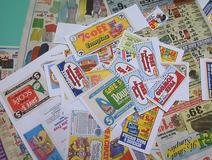 So, I went to the Grand Opening sale at my brother-in-law’s QFC up there on 145th. Not only did they have those awesome Grand Opening prices, but I had some killer coupons. In fact, I had a FREE pizza coupon and a $1.50 off any meat purchase over $7. With the store offering T-bones for $3.97 a pound, that was easy.
So with those two coupons definitely going to be used, I tore them off from the pack and placed them in the shopping cart.
After whipping around the aisles, I went to see what kind of pizza it was that was free…and the coupon was gone! Both of them!
So, I quickly retraced my steps and there, in the distance, were the coupons on the ground.
I started that way when a woman walked up, picked them up, looked them over and excitedly showed them to her husband.
At that point, do I yell at her, “Hey! Lady! Those are MINE!”? I wanted to, but for whatever reason, I decided it would be best to let it go.
Coupons are a lot like love. If you drop them on the ground and someone picks them up, it was never meant to be. But if you pick them up and they are really awesome deals, they probably were at one time mine.