I was actually much happier than the mask would indicate

There are lots of ways to divide people: religion, politics and the holiday some are celebrating this Friday, Halloween.

Most holidays that roll around, people take ‘em or leave ‘me. “It’s St. Patrick’s Day? Wasn’t even on my radar.” “Veterans Day? Better put out the flag.”

But Halloween either makes you smile or cringe. There are some people who just won’t dress up. Something happened in their childhood. Not sure if it was a moldy Snickers bar or they once got lost as a kid at Display & Costume, the idea of putting on a costume just isn’t them.

Then there are those of us who have always dressed up and actually put some thought into what we’ll be this year. The 2014 edition of the Hunters in Disguise will be inspired by the TV show and book series, ‘Outlander.”   I actually bought a kilt, puffy shirt, sword and ordered shoes for the outfit, while Victoria bought a medieval-style dress, so we can look like we just walked off the show. Here’s hoping for everyone’s sake it’s not a drafty night.

Going back to the days when I was growing up, Halloween costumes were a thin material one-piece outfit with a plastic mask that prevented you from breathing easily and could barely see out of. Then, you hit that age where you’re old enough to go out on your own, but you hear the clock ticking and know that you have one, maybe two years left to do this massive candy round-up.

During my kids’ Trick or Treat days, we lived in a pretty cool neighborhood, with nice houses and people who answered the door with treats and something for the parents to drink. After a while, it became quite well-known and groups would actually bus in their kids to give them a safe place to trick or treat. It would mean going through a half-dozen Costco bags of candy, but you got to see a lot of very cute kids enjoying a magical night in the neighborhood.

I do remember one Halloween in particular, when my daughter Christina was around 3 and it was probably 25-degrees outside. With Halloween costumes being more about cuteness than warmth, I remember wrapping her up in a blanket, walking her up to a door and ringing the bell, letting her get her candy and then re-wrapping her until we got to the next porch.

So many Halloweens ago….

As adults, I’ve seen ‘em all, including the time KLSY sponsored a Halloween party with round trip airfare for two to Transylvania as the first prize. OMG, were there some great costumes, including a 9-foot alien and a Cleopatra being carried around (but it was really just one person). It was just a year ago that a group of former KLSY-kateers gathered at the Brooks residence for a party, and most dressed up. The Brooks family decorated their “mansion” to the nines.

Maybe it’s the idea that when do something that a child would do—dress up—you’re pausing the whole adult thing for even just a few hours. You get to be silly and have swapped a little bit of dignity for that feeling of being a kid again.

To those who refuse to join in, I understand…but I don’t. It’s your call, but if it’s been quite a few years since you put on a costume, maybe, just one more time—give it a try. I don’t expect you to head out to the most sincere pumpkin patch and hope to catch a glimpse of the Great Pumpkin, but you just might experience a type of fun you haven’t known in years. 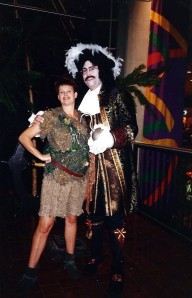