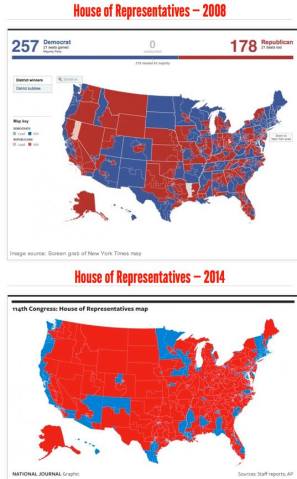 What a difference a couple of years can make.

Politics is such a touchy subject.

I’ve blogged about this before, at the risk of alienating some friend or relatives.  But that would be OK.  If you are that far off the chart, then we probably should communicate less. For the greater good.

Because, you see, I’m pretty loosey-goosey when it comes to politics and religion.  I have my ideas, my beliefs and they’re all mine.  I continue to search for input and growth, but how I think is entirely up to me.  The same is true for you.

Witness the election results from the past week.  Once again, there was a political swing in this country.  The ones on the losing side discount it or belittle those who voted that way.  The winners gloat, as if they’ve been given permission to revolutionize the planet.

As always, the truth is right there, smack dab in the middle.

When you don’t have an agenda, or a checklist that you measure everything with, you can actually have an open mind.  That gets back to that “thinking for yourself” outlook on life.  It’s a great place to be.

As you saw with the TV political maps, there are red areas of the country and blue areas.  However, they didn’t just print those maps up a couple of hundred years ago.  The reds and blues, much like the website passwords I can never remember, keep changing.  Yes, there are areas that will always be blue or tend to go red.  So let’s remove those from the discussion and focus on the rest of the country.  I’m proud to say, it swings based on how people feel the job is getting done.  There were states that voted Reagan in who elected Barack Obama to be our president.  This last election, there were states that elected Barack Obama who voted out senators and congressmen in his party.

I’ve watched the posts on Facebook.  I live in a fairly liberal, very blue part of the country.  You would have thought Martians had landed and taken over.  Nope, those are Republicans who went back to the basics of the party, rather than the fringe wackjobs that have forced themselves up on the stage in recent years.

Being an “in the middle” guy has its drawbacks.  Because there are a lot of things I don’t like about both of the major parties.  I want our government to help people, but not to create a land of dependency.  I’m glad to give you money to improve our lives, but not to recklessly spend it.

Maybe you’re one of those who fills out your ballot by looking for the D or the R.  You’ll always be red or blue.  But as we go back to the map, you’ll see that the majority of the country went red this time.  A lot of those people were blue just two years ago.  That gives me hope, as people are realizing they have the power to tell our politicians to do their job, or we’ll find someone who can.

While the negative campaign ads drive me nuts, election night results are the payoff.  Vote how you feel the world should be run and then let’s see what the majority thinks.  I’m not always in it, but I’ve been around enough to see the country swing right, then left, then right again and back to left.  It’s healthy.  It’s what a democracy is supposed to do.  Those people who voted differently than you this time are just voting with their hearts and minds.  It’s how they feel.

If you can’t understand how they could possibly go away from the promises and rhetoric of a party, consider just for a moment–instead of them being less qualified to vote on the important issues of the day, maybe it’s you?