Last Wednesday, August 14th, the long-awaited, much anticipated Rolling Stones “No Filter” concert took place at Century Link Field and the longest concert journey of my life finally came to an end.
This goes back a couple of years, to 2017, when a Norwegian friend of ours asked me the question, “Do you like the Rolling Stones? If they came to town, would you like to go?”
It’s kind of like someone asking you, “Would you mind winning the lottery? I know the money is messy and causes problems, but…”

“YES!” I replied, “Tell me when and where to be and we are so in!” It turns out this person was the cousin of Keith Richards’ wife. They hadn’t seen each other since the World’s Fair in Seattle in 1962, when she and her family came to visit.  Over the years, this cousin grew up, met Keith at a party and 36 years later, they were still living the rock ‘n roll dream.

Then, late last year, the Stones announced they were touring and would hit Seattle in May. We contacted her to see if her offer was still good and she said absolutely.

On the work side of my life, my radio addiction job at KRKO up in Everett rounded out my Rolling Stones experience. An out-going promotions director managed to talk the Stones promotional folks into setting our station up with ten pairs of tickets, half on the 100 level and the other half closer to the moon, than to the stage. But they were still Rolling Stones tickets.

We gave away a pair a day right before Christmas and the phones melted down.  Five very happy KRKO listeners had Stones tickets in their hands for the holidays to do whatever they wanted to do with them.

The New Year begin with great anticipation of a legendary show come May. But then we got the word that Mick Jagger needed a procedure to keep him going and the Seattle concert was post-poned until August 14th.  We checked with our ticket source and she told us we were still on for tickets!

That was scary because we had scheduled a trip to Scotland and Ireland in August and I just knew they’d reschedule when we were gone. But the rescheduling gods smiled upon us.

On the radio side, we had more fun giving away more tickets. We asked people to “Show us your KRKO” and they did. That’s how you entered the contest. 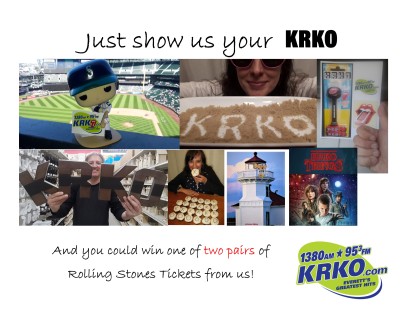 After we gave those away, we had a couple of pair left and so we steered people towards EverettPost.com, a sister company of the radio station. I encouraged people on my Facebook to enter and one friend who entered to “support the radio station” ended up being the winner. I didn’t do the drawing, so it just all worked out.

The day of the concert, our friend was up from Eugene, Oregon, and we picked her up and drove to Century Link Field. Her V.I.P. tickets came with a special parking pass that had us by the tour buses underneath the parking garage. They had a police car blocking the entrance until the sniffer-dog made sure you were OK.  We parked and headed towards our rendezvous with other cousins at a local watering hole.

They let us pass

After a libation or two, we got in line and waited about 20 minutes before they opened the gate. Our passes got us into the stadium and to a special V.I.P. reception, although basically it was beer, wine, potato chips and chocolate chip cookies. Still, a nice setting that allowed us to overlook the filling stadium and enjoy a free drink or two.

View from the V.I.P. lounge

A guy who was there and getting a lot of attention, posing for pictures with people and such turned out to be the Stones’ long-time keyboard player who has been with them since 1982. I guess the die-hard fans knew that. It was news to me.

So, off to our seats we headed and according to the tickets, we were in row 6. With help from the ushers, we found our seats, sat down and couldn’t see the stage. It was probably 100 feet away and you had to stand to see it because of that stuff in the way. My wife, Victoria, even checked with an usher to see if we were in the right seats. We were.

It turned out that “equipment” in the way was actually part of a stage that ran out into the crowd. When the band came out and performed out there, they couldn’t have been more than 40 feet away. It was amazing.

Needless to say, it ended up being a once-in-a-lifetime experience. The opening act, Lukas Nelson (one of Willie’s sons) knocked it out of the park and I’ve already bought a couple of the songs he played that night. But the Stones and their entourage completely delivered.

From the 5-story screens, to energetic performances that didn’t betray any of their ages, they were as good as ever. Maybe better than ever, because as you know, the older you get, the more you appreciate things like still being here and doing what you love. And it was all capped off with fireworks overhead.

There had been talk about getting backstage passes, but that went away when Keith’s wife stayed home with their daughter to work on the daughter’s upcoming wedding. Oh, well.  Would have been nice, but maybe more than my little brain might have been able to comprehend that night.

I’m sure there are lots of other stories I’m forgetting, but the bottom line is, at this point, that was the greatest concert experience I’ve ever had. And at last, my great Rolling Stones adventure was complete. An oddysey that began two years ago, culminating in something I’ll remember as long as I’m breathing.

You can’t always get what you want, but in this case, I really, really did.