At the risk of this turning into a travel blog, I’m going to take you on a second adventure in a row. This time, to north of the border and the picturesque city of Victoria, B.C..

Yes, it was a tad redundant going there with my wife, Victoria, but the trip delivered on the promise of being one of the best day-trip adventures available to those of us here in the northwest.

We went last Thursday after a busy week of playing tourists in town with some out-of-town guests.  Probably not the best planning, but outside of the time commitment, it’s a pretty easy undertaking.

OK, you could drive, heading towards Vancouver and veering off to the left to catch the Tsawwwassen ferry, which drops your car off on Vancouver Island. (yes, Victoria is on Vancouver Island, but Vancouver is on the mainland. Those wacky Canadians!)  That will take you 3 hours to get to the ferry terminal (if the border is kind), then there’s the boat ride and 40-minutes to Victoria.

OR you head downtown, catch the Victoria Clipper and less than 3 hours later, you’re getting off in the harbor, across from the Empress Hotel. We chose plan B. 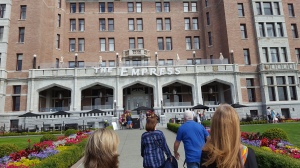 That’s pretty wide open. Shopping is a good idea, since the exchange rate has returned to the 1970s and you basically save 31% on everything you buy. In town, there’s high tea at the Empress (which is now missing its ivy covering after a $30-million makeover). Butchart Gardens is one of their most famous attractions and while they keept it attractive during the fall and winter, spring and summer is when you want to catch it.

CVS Tours offers a nice package that we took advantage of that included the bus ride to and from Butchart, along with a stop at the Butterfly Gardens.

That’s a perfect place for an added stop because right next door to the butterflies is a winery we absolutely love called Church & State. They’ve got the grounds, the growing grapes and a place to grab lunch. Oh, and of course, wine tasting.  We even tasted a Merlot that had received 98 points. It was $40 a bottle, but the exchange rate lowered it to under $28. You’re supposed to only bring back one bottle per person, we pushed it to two and all arrived home. All are under heavy guard. 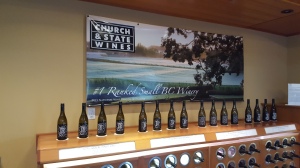 I’ll bet it’s been five years since my last time in Victoria. Back when the Clipper first started making runs up north, I would host KLSY Listener trips to Victoria and I developed a fondness for that place. What a wonderfully clean, quaint city. And with this year’s stellar summer weather, it just doesn’t get much better.  I’m going to have to make a point of not forgetting about this excellent one-day escape.

When was your last time in Victoria, B.C.?