It’s a scrapbook.  That’s its job.  The typical scrapbook is full of things like birthday cards that, as a kid, you thought you’d want to keep forever.  Maybe a couple of postcards, a ribbon you won, and so on.

While organizing my office, I came across this familiar-looking book:

It went back to my early years, while growing up in the 1960s. It was full of all kinds of treasures–from the giant Dodger collectibles you’d get with a fill-up at your nearest Union 76 station, to postcards of the many places we went while growing up. I remember the time as a Cub Scout, we took a field trip to the racetrack, Hollywood Park.  Besides seeing the stands and where the horses resided, we also got to go out to the center area, a special lake where the Goose Lady lived.

I was young.  I just assumed she lived there all year ’round.

I also found some old vintage pictures and postcards that our neighbors had given us.  I guess I turned into a packrat at an early age, but how can you blame me?  How could you possibly throw away an autographed picture of actual Siamese twins from 1932?

But the real prizes found in this scrapbook were autographs of sports stars from years gone by.  My dad, God bless him, worked out at United Airlines back when it was at its prime and when famous folks flew regular commercial flights, including sports teams.  Back then, there were no sky bridges to take you from the terminal to the plane.  You had to go down on the tarmac and walk up some stairs.  Between the terminal and the plane were mechanics, like my dad, who always carried some 3X5 cards with him, just in case.

That’s how I came into possession of these autographs of sports stars from my past. 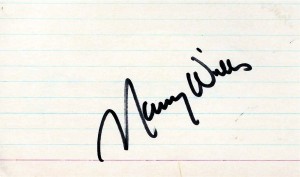 There are other Dodgers he talked into signing his 3X5 cards, including Bill Buckner and Don Sutton.

He also managed to catch the Los Angeles Lakers a few times.  The guys I watched on TV and my dad had talked with them and got their autograph.  Gail Goodrich, Jerry West–several times.  I bet after a while, Jerry probably said, “You again?”

But here’s the amazing part of this particular 3X5 card.  For years, I treasured it and had it attached to a scrapbook page with photo corners.  Decades after assigning it in that book,  I decided to take it out and look on the back. Lo and behold:

Yes, the autograph of none other than the King of Champagne Music, Lawrence Welk.

Oh, and one other autograph I found in this scrapbook.

None other than Julius Wechter from the Baja Marimba Band. It was the band of choice for those who couldn’t afford Herb Alpert.  How did we get that one? It turns out Julius’ aunt did my parents’ taxes.

Aw, the memories of a scrapbook….

One thought on “A Book Of Memories”