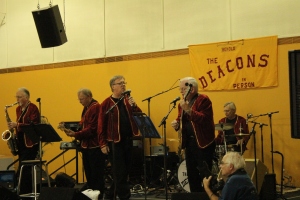 The band takes the stage

Last weekend, we got to travel back in time.

My wife, Victoria’s mom’s cousin—you still with me?—John Sandvig, invited us to come down to PLU for a very special homecoming dance.

Neither of us were PLU alums, but there was a special reason for the invite. The band that was playing. The band John Sandvig performed with, as the lead singer, back in the 1960s: The Deacons.

That was a decade when it seems like everybody was in a band. Dick Foley and some of his frat brothers formed The Brothers Four. My old broadcast buddy, Larry Nelson, was in a doo-wop band, The Shades. He loved to tell the story of how he would stand out on the Ave in the U-District and they would pay kids to go in and buy their record, so they could get airplay on KJR. After all, sales equaled airplay.

But in this case, it wasn’t about record sales. Sure, they went into a studio or two and recorded some songs, but for the Deacons, it was all about the live performances. I believe the number John told me was over 350 dances in 3 years, mostly in the south Puget Sound. But they also performed at various venues from Vancouver to Vancouver.

But back to the special occasion of the Homecoming Dance at Pacific Lutheran University. Somehow, someone there thought it would be great to bring back the band that played at the very first co-ed dance ever held at the school in 1965: The Deacons. 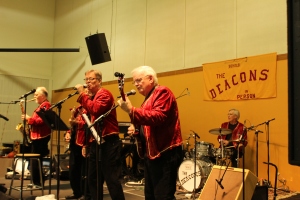 Picking up where they left off

The members were contacted, weekend and long-distance rehearsals were planned and the next thing you know, the big night had arrived. John’s wife, Bunny, even sewed some blazers similar to what the band wore back in the day.

Yes, 49 years later, they were back. Older, yes. Grayer, absolutely. Needed the words written down on a music stand, you bet. But for just under 3 hours, the boys were back and a very appreciative crowd of all ages, ate it up.

The night’s special guest—the Tacoma News Tribune’s Larry LaRue, who had previously written this cool article about the band and personally remembered their glory days.

It was a night of northwest music history and I was fortunate enough to have been there. 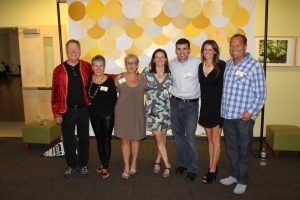 John & his family strike the pose

One thought on “BEHOLD: The Deacons”