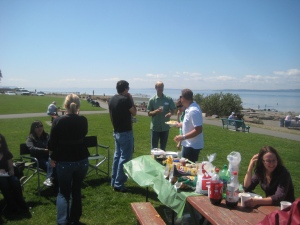 Today is our annual Destination Marketing company picnic, along the Edmonds waterfront. We’ve been doing this for a couple of years now and while the weather hasn’t always cooperated, it’s consistently been a chance for co-workers to hang and chat about something other than work.  Mostly.

I’ve always enjoyed company picnics, going back to the days of United Airlines and the big spread that was put on by the Machinists Union down at Elysian Park, the one near Dodger Stadium.  I just remember lots of room to run, games, water balloon tosses, a swimming pool, hot dogs, you name it.  Looking back, it was like a scene out of The Wonder Years.

KOMO radio put on quite a deal the first couple of years I was there back in the 1980s. They were out at Vasa Park on Lake Sammamish and it was the tail end of companies providing kegs for such celebrations.  In fact, the two moments that might have led to this being the final year of beer at the company was picnic was Norm from the mail room running around on his broken foot and one of the news people slobbering all over the wife of one of the VP’s.  Sure was a heck of a lot of fun to watch.

These days, company picnics are rather tame.  Ours is a fairly civil celebration, but as I look back on the video I took at these occasions, there’s  some great stuff. Most recently, at our last picnic, we have video of Jennifer announcing to her co-workers that she was indeed pregnant.  This year, she’ll bring along a special guest to the picnic.

It’s not easy making these things happen, especially when work has become so busy.  But sometimes you just gotta force people to have fun and today, I’m not taking no for an answer.

80-degrees and sunshine along the Edmonds waterfront, here we come.