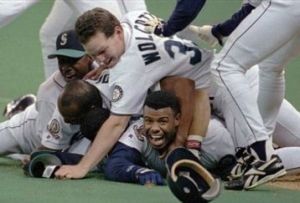 So, the year was 1995–by far, the greatest thrill ride ever offered by the Seattle Mariners. I was in the radio biz and it’s tradition that every great team needs to have their own playoff song.
What I remember about “Faith (in the Mariners)” was that it was one of the songs being pushed by a record label.  It’s real name was “Faith” and it was by an up and coming artist named Sari. The label called us, offering to re-sing the song if we came up with the lyrics. I remember it being a rush job, like “We’ve got studio time on Thursday night, so you’ve only got a day to write something.”
I asked Bobby Irwing, the KLSY program director at the time, for his recollection of how this song happened, and this is what he remembered: “Record label wants us to play their new song “Faith”…sounded like a mid charter at best to me. Since the biggest chatter in town was the M’s, record guy sez “if we do a custom mix of the song and include stuff your about the Mariners, would ya play it THEN? I said of course. Timmy does lyrics, Nixon does a little remixing with sfx, the rest is history.”
Thanks to Bobby’s connections, John Nixon’s remixing and a couple of clunky word changes, here’s that song that’ll bring back some memories from that great playoff run of ’95.
Enjoy!