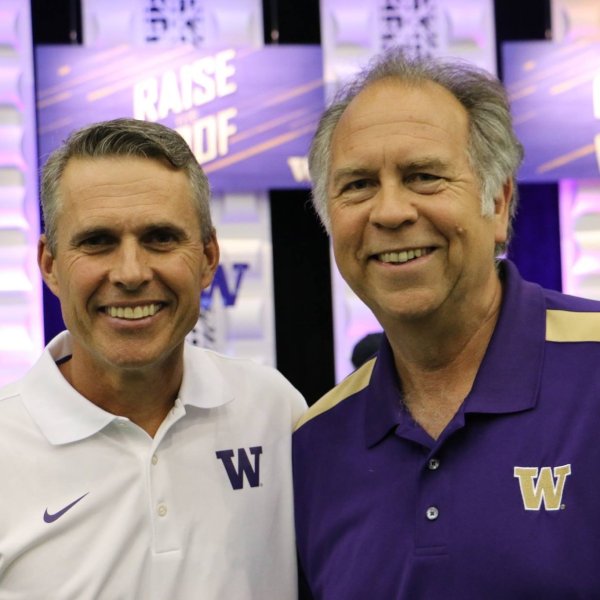 If this keeps up, this corner of the Internet will be where you’ll find all the latest retirement news. Last week, I bid farewell to Channel 4 weather guy Steve Pool. This week, I’d like to put in my two-cents on Husky Football Coach Chris Petersen.

We’ll begin with the day I found out. I was on the phone with my business partner who was down in Arizona and we were talking about stuff coming up in the week. All of a sudden my phone displayed an alert from the Associated Press. It was hard to ignore, so I glanced at it while continuing to talk. I saw it just long enough that it had something to do with UW Coach Chris Petersen, but I didn’t see the ‘what’.  I immediately stopped talking and let him know I needed to check something out. Sure enough, Chris Petersen had resigned. It wasn’t ‘fake news’ or something from The Onion. I went to the Seattle Times and there it was online–our dream Husky coach was stepping down.

Petersen was the closest thing to a Don James type Husky coach we had seen since the Dawgfather. I began as a student at the University of Washington in the fall of 1973. That first year of going to college football games was a bit surreal, as students protested outside the stadium, demanding that the school fire the longtime coach, Jim Owens. He stepped down after that season and this meek and mild looking guy from Kent State University took over the program. In time, he would take the team to many prominent bowl games, including several Rose Bowl games and guide us to a National Championship.

In time, my career took me to KOMO Radio, “Your Husky Station”, which gave me multiple occasions to talk with the coach. He would come into the studio and I would be awe-struck. There were times when I helped his wife record radio commercials for QFC. In my early days at KLSY, we had a Don James show, believe it or not. And for one of the Dawgs’ Rose Bowl appearances, my KLSY broadcast partner Bruce Murdock and I ordered breakfast to be delivered to his hotel room and he called us up to say thanks.

Yet, for all those times I was with the coach, I never got a picture with him. There was one spring game that I went to when I saw him in the stands and we chatted, but I didn’t want to bug him for a picture. After thinking about it, I went back, but he was gone. He passed away shortly after that.

Coach James resigned after the team was gonged with sanctions for things the boosters were caught doing. He could have stayed, but the team would have been bowl ineligible for years to come and he knew that his time was done. The years that followed were dismal. Losing seasons, including an 0-12 debacle, and a series of expensive but short-term coaches that left the program wallowing in the mud for longer than we deserved.

Then, when Steve Sarkisian wandered off to U.S.C. (and both sides got what they deserved) we were lucky enough to talk Chris Petersen to taking over the program. He had performed miracles at Boise State and I remember seeing him on TV when he was hired, talking about this gig being his dream job. I thought for sure we’d have him for decades.

Thanks to an event called, “Raise the Woof” that the football program puts on every year, fans can pay $75 to hang with the entire team, the coaches, etc. and get a chance to actually talk with the athletes and their leaders. One of the years we went, my wife and I each won a Chris Petersen bobble-head. She had hers autographed. I thought at the time, “No, that’s silly.” Now, I have another regret involving a Husky head football coach.

The reasons Chris Petersen is leaving the program have not yet been revealed, other than he feels he’s done with head coaching. It’s something he’s been doing for 33 years. He says he’s a Husky for life and, after a recharge, plans to come back to the U.W. and work with the other athletic programs to help them achieve as much success as possible.

He was here only six years, but they were crucial years. Petersen righted the ship and brought the program back to Don James’ standards. He even kicked one guy off the team last year because he wouldn’t listen. This guy thought he was better than the team. He now plays in the NFL, but I believe after being kicked off the team, he even came back later that year, apologized and made amends with the coach.

The loss of Chris Petersen is hard and what makes it harder to accept is not knowing the ‘why’. But I’m excited about the future, about the foundation that Chris Petersen built and is now handing off to another brilliant football mind, Jimmy Lake. There are greater days ahead.

But for now, for the second week in a row, I’m saying goodbye to someone I hugely admire. Should I ever have the chance to speak to Coach Petersen again, I’ll only have two words to say: “Thank you.” 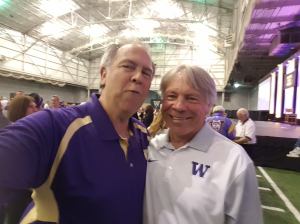 Of the billions of people on this earth, we’ve chosen a few along the way to label as “friends.”

Friends come in many forms. Facebook Friends. Best Friends. Close Friends. Great Friends. Sorta Friends. Casual Friends (some with benefits). There are Childhood Friends, High School Friends, College Friends, Work Friends. Think of any of those categories and I’m sure names and faces pop up in your mind. As many as there are different types of people, there are varying degrees of friendship. I put an extremely high value on my friends. Over my six decades, I’ve made a lot of them and stayed in touch with as many as possible along the way.

There are some people who limit the amount of friends, keeping it a core group.  The group of friends they stay in touch with are pretty much it. In my case, I’ve got a ton of really good friends that I see sporadically. It could be several months, it could be years. But those are the people who know, when we get together, it’s as if it had just been moments before and we just pick up where we left off. None of that, “You never called” stuff.

There were the elementary school friends, who I lost track of. The high school friends, which I’ve reconnected with thanks to Facebook. I hit the jackpot with my college friends. I’m hoping at some point, I can do justice to that story and write a screenplay about those crazy days at Terry Hall.  And of course, my incredible collection of radio friends that I have made along the way. There’s a lifetime supply of stories right there.

The one term I have a really hard time with is, “Best Friend.” To single out one person out of all the people I know, I’d probably have to default to the cliché answer, “My wife.”  I don’t really have one person I would call a best friend but that’s because I want it that way. If forced to identify someone outside of my marriage as a Best Friend, I’d probably say, “It’s whichever friend I’m with at the time you ask.”

There are people-watchers. I’m a people-listener. The bottom-line is that everyone has a great story.  Last weekend while chatting with Victoria, somehow I got on the topic of a certain person and suddenly, details started spilling out about their life and their story.  All stuff that could easily end up on the Hallmark Channel. Maybe it’s the writer in me, the story-teller, but it’s the details of people’s lives that simply fascinates me.

If you’re a friend and you’d like to sit around some day and compare life stories, just say when & where. There are actually two people from my past that I would love to have that conversation with and hear how life has gone since the last time we saw each other.  I think we all have people like that. For no other purpose, just for the curiosity of it. Here’s what happened to me, how about you? How was your life? I really doubt these two particular conversations will ever happen, but I’d like to believe they will.

Or maybe, just maybe, that’s what heaven is. Just sitting there, with a friend from long ago, swapping stories, getting answers to your questions, remembering old times. Having their stories trigger more of those long-lost adventures from your memory bank.

For yours truly, that would work. A lot. Yeah, that sounds like heaven to me.

Family is assigned to you. Your friends are those wonderful bonuses that add so much to our crazy story of life.

To all of my friends, thank you for being a part of my story.