So, I started the week at the eye doctor for my annual check-up. Truth be told, this exam was scheduled a couple of Fridays ago and I just flat-out spaced and missed the appointment.

I set 126 reminders on my phone, on Alexa, I wrote notes, I was not going to let this happen again. I arrived 15-minutes early and was among their first patients of the day. Since they hadn’t seen me for over a year, they handed me a printout and asked me to verify that all of the information on the paper was correct.

I started with the phone number. Nope, that’s wrong. I checked the address, wrong again. Up and down the page, none of this information made sense and that’s when I headed for the name.

Right there, as plain as the nose on my face: Tom Hutyler.

You see, three decades ago, Tom and I worked together at KLSY. Tom had been the afternoon guy, but the station decided to take me off weekends, put me in afternoons and shift Tom and those dulcet tones to the mid-day slot.

But you couldn’t have Tom Hutyler on the radio, followed by Tim Hunter and the station’s first suggestion was for me to change my name. I had never used an alias (or “radio name”) on the air in my career, so I offered an alternative. What about adding my middle initial as a differentiator? They bought it.

So, for a while on 92.5 KLSY, it was Murdock in the Morning, followed by Tom Hutyler, and then me, Tim J. Hunter.

Most of the disc jockeys I’ve known over the years arrange the shifts in this hierarchy: if you can’t have the morning show, grab afternoons. If afternoons are available, put your foot into mid-days and then wait. Well, Tom wasn’t about to wait and the next thing you know, he was off to a successful run at KUBE and then, he wound up over at KOMO radio, where he still anchors the news today. That is, when he’s not being the voice of T-Mobile Park for the Seattle Mariners. Yep, when you hear that stadium voice, that’s Tom.

Back to this bizarre coincidence. I shot Tom a quick Facebook message and let him know about what had happened. He let me know that he had an appointment later that same day.

What are the odds? We go to the same eye clinic and had booked appointments on the same day.

I figure when he got there for his appointment, they probably had him review my contact information. You know, come to think of it, I haven’t seen Tom in person for a long time. Maybe I better book another eye appointment? 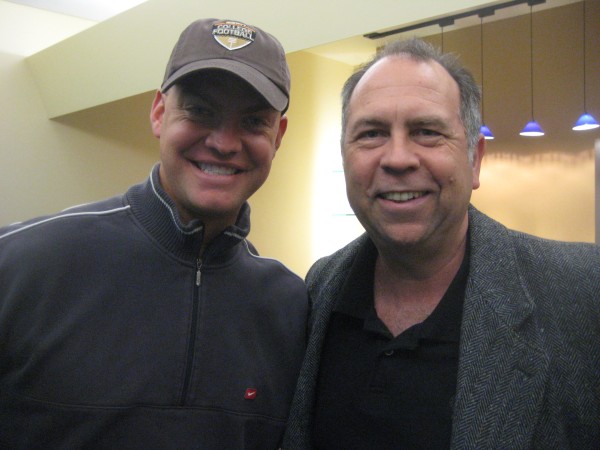 The late James Doohan stops by KOMO, getting caught up with a former KLSY, Mr. Tom Hutyler and my Soundie-nominated song, “Somebody Farted.”  And you were there! 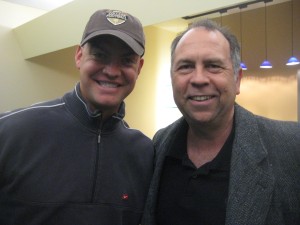 Brock and Me, Hangin’ at the Sounders