It’s been confirmed that the last of them will go away sometime in September. The week following the shutting down of the last Toys R Us, they announced that ten more Sears stores would be closing soon.

This will be the last 4th of July America can shop at Sears.

Sears & Roebuck, to be exact, although I think Mr. R had his name cut off a couple of years back. Younger readers may wondering, “Why the big deal?” and I can understand why you feel that way. I recently walked into the North Seattle store and was in there at least a solid 5 minutes before seeing anyone–customer or sales person.

To feel the way I do about Sears fading into history is because that store has been there all of my life and not just in the background.

Growing up, the Sears Christmas Catalog would come in the mail sometime after school started and begin fueling the dreams of what you wanted to ask Santa to bring this year. I’m talking full-color, half-inch thick, page after page stuffed with dolls, toys, race cars, trains, pogo sticks, you name it. It was Santa’s job to bring what we picked out, but Sears was kind enough to put everything into one, often-viewed catalog and let us know our possibilities. I’ve got a 1962 “Wish Book” as it was called back then that I will never let go.

There was a time that Sears was “Where America Shopped.” That was their slogan and it was the truth. My back-to-school shopping trips always took place at Sears because they offered “tough skin” jeans, with the extra layer of material on the knee, for boys who tended to wear them out. Little did I know at the time that I was predicting a fashion trend where pre-ripped jeans would go for $100 at Nordstrom. Sears also had those “Husky” sizes, for the beefier kids among us.

When dad needed a tool, of course he bought Craftsmen. That was the Sears brand with the lifetime guarantee. If your hammer, screwdriver, whatever ever broke, bring it back and Sears would give you a new one.

Sears holds a special place because it was just several blocks from our home and back then, we would often find ourselves over at the Del Amo Mall. It was their anchor store, where they had a garden shop and lawn mowers and color TV’s and stereos.  Sears had everything you needed. They had built that reputation since the early days, when they even sold homes. Yes, houses. Down in Ballard, there are quite a few “Craftsmen Homes” that were sold as kits.

One more thing. In my junior year at Torrance High School, because of my rah-rah involvement with school, etc., I was asked to become a member of the Sears Teen Fashion Board. THE WHAT?  They invited students to be on this board, which involved an occasional fashion show where we would model Sears clothes, they put our pictures up prominently in the store and gave us a couple of hours working. That was my first paid job outside of mowing lawns.  At first, I was a “floater”, which meant you could end up in Children’s Clothing (the department, not actually children’s clothing), Lawn & Garden, or Hardware. When you showed up, they put you where ever they were short employees.   In time, I became strictly Division 9–Hardware.  I knew the tools and when someone had a question, I could actually sound like I knew what I was talking about. It was during my tenure there that Sears converted from the old key cash registers to computerized versions and I became very good at that. I could ring up a sale and then wait a minute for the computer to catch up with me. 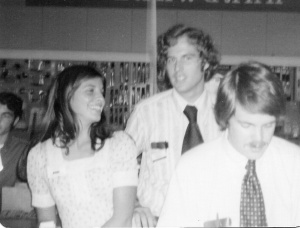 Some of my former Division 9 co-workers

Remember that lifetime guarantee Craftsmen tools offered? One time a customer came in holding on to an ancient-looking ratchet. Sure enough, even though he had it since 1947, we just gave him a new one. Yes, it was a different time. How different?  Shortly after I started working there, they began being open on Sundays, from noon to 5pm.

So, how could a company that had everything, where everyone shopped and felt at home from the moment they walked in and grabbed a bag of that free popcorn…how could they go away? The answer–very slowly.

Not enough attention was paid to what customers. There was competition. Loss of brand value, like in appliances. Kenmore was once a sign of the highest quality and dependability. That slowly faded away.

I stopped by the Southcenter Sears store today and it was depressing. Employees going through the motions, sales people trying to talk customers into getting a Sears credit card, knowing full well the store disappears in a couple of months. The visit helped me realize that’s probably my last time inside a Sears.  They just aren’t what they used to be.

Saying goodbye to a part of your life isn’t easy and it seems like these farewells are becoming more frequent. However, as it’s often pointed out, aging has its drawbacks, but it’s better than the alternative.