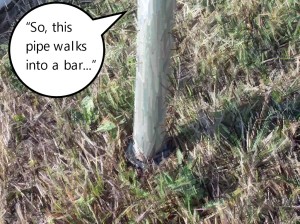 Lousy artist’s conception of what The Talking Pipe looked like.

Last week, I bared my soul about a sensitive topic.  It’s an issue on which people have very strong stands and it’s entirely possible, I may have offended at least a couple of folks along the way.

If you didn’t have the chance to read it and be offended, you’ll find it immediately below this one.

These blogs are a bit of a time capsule.  The world is an ever-evolving place, and I consider these ramblings to be a scrapbook of thoughts that I hope live on the Internet long enough for future generations to learn from them.

As I approach my 60th birthday, I feel very fortunate to have already experienced so many things that anyone under 40 find hard to comprehend.  There was a time when TV was only black & white, telephones were tied to walls and had rotary dials and party lines.  The number of TV stations was in single digits. Stores were closed on Sundays.  Yeah, it was that kind of world.

Coming off such a serious topic last week, I really wanted to keep it as light as possible this week.  So, I sat back, let the mind wander a bit and then, I managed to extract this little gem from the depths of my memory bank—the Talking Pipe.

I grew up in Torrance, California, now famous for being the home of Louis Zamperini.  During my high school years (at the same school Louis attended, just a couple of years later) Friday nights after the football game meant driving up to the Palos Verdes Peninsula, looking out over the city lights and enjoying some romantic moments with your favorite girl.

One of the secret little hideouts for teenagers was a dead-end street, which became famous among necking circles for being the home of The Talking Pipe.  It was a large steel pipe (thus, part of the name) that protruded out of the ground, about four feet tall.  If you walked up to it and put your ear near the opening, you would hear voices.  Nothing you could make out, but they were definitely muffled voices.  Every time we performed this ritual, the pipe “talked”, just as the legend claimed.

Of course, since then, with only the slightest of mental effort, we figured out that this pipe sticking out of the ground high on a hill acted as an antenna.  Because of its location to a nearby news station’s broadcasting tower, the broadcast signal was picked up and sounded as though it came from deep inside the pipe.

Mystery solved. However, The Talking Pipe is one of those high school experiences I remember fondly.

Almost as fondly as what happened in the car afterwards.