This past Saturday was Washington State’s “Opening Day” of fishing season.

Since meeting my wife back in 2007, this became a high holy weekend. Heading up to their family cabin on Opening Day Eve, getting up early on Saturday and then zipping down to Lake McMurray with my father-in-law, Ernie Templin, to catch our limit. We lost Ernie a couple of months ago and so this marked the first time I went down to that lake by myself. However, I’m pretty sure he was with me.

Some years, we borrowed a neighbor’s boat and would troll up and down that serene lake, hoping to catch a couple of rainbow trout, which we usually did. In later years, we lost access to the boat and with Ernie, it just seemed smarter to not go out on the water and fish from the dock.

Part of the annual tradition included a couple of hours of fishing and then coming back in where a “Fishermen’s Breakfast” awaited us in a giant gazebo. The menu included an egg casserole, some pancakes, hot coffee and a roaring fire and, to be honest, I think Ernie looked more forward to the breakfast than the fishing. 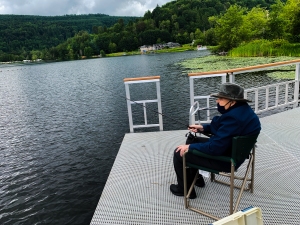 Ernie, back in his fishing days.

While I didn’t spend my entire childhood getting skunked, “Hunter luck” seemed to haunt us quite a bit. But all it takes is to have that first positive experience of catching a fish when you’re a kid and it tends to stick with you.

My fishing addiction began back when I was around five-years-old and we went back to South Dakota to visit relatives. My Uncle James, my dad and yours truly made the drive over to the Missouri River and we went out on James’ boat. How fun! But this is where I fell in love with fishing. They gave me some kind of kiddie rod & reel and we were fishing for Northern Pike or Walleye, which ever one would bite. I remember I got a strike and was really struggling, but my Uncle James told my dad, “Let him bring it in!” Eventually, I did and it ended up being the biggest fish caught that day.

Then I had a chance to go up to Big Bear Lake to my Uncle Chuck and Aunt Colleen’s cabin with my cousin Charlie, where I would get to fish again!  I remember being out on the boat, where I got really hungry, so I ate some salmon eggs to see what they tasted like. My uncle thought it was hilarious. We didn’t catch anything that I remember, but that could have been because of having three Hunters in one boat.

Other times on those family vacations to South Dakota, we’d wake up on a Sunday, go to church, come home and pack a picnic and then head to one of their nearby lakes to fish for the afternoon. We have some great home movies of one of those outings, with my Grandma standing there, drinking a beer. Aw, the simple life.

Grandpa Brandner showing us how!

Every family vacation usually included some fishing. When I became a dad, I tried to introduce fishing to my two kids. When my son hit high school, I even went on a couple of salmon fishing trips with him. What a blast! 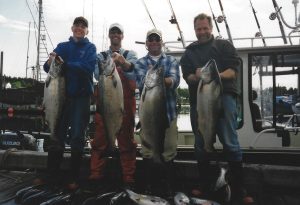 So, between my family fishing history and the tradition my father-in-law enjoyed, I just had to be out there this past Saturday morning. Did it rain the whole time? Yes. Did I catch anything? No. Did I even get any nibbles? Two.

But as I sat there on the dock all by myself, I saw fish being caught by all the folks out on the lake. Phrases like “Oh, wow!”, “Look at the size of that one!” and “That’s a keeper!” filled the air. While there wasn’t much activity at my end, it was still great to see so many families out on the water, trying to keep their own fishing tradition going.

After around two hours of being cold and wet, I started to wonder, “Maybe this is good enough. I at least came out. If it’s time for me to give up and head back to the cabin for a hot shower and coffee, give me a sign!”

Just then an osprey flew by literally right in front of me, carrying a fish.

Even the birds out fished me. Must have been a flare up of that Hunter luck.

But no matter. The tradition continued. Another Opening Day in the books.

Trying to get the grandkids hooked

Can’t wait for next year.

I took part in an annual passage today. Well, part one of that passage, anyway.

I purchased a fishing license.

The end of April includes a special Saturday when I find myself up at Lake McMurray, just east of Mount Vernon. We usually get there Friday night, eventually go to bed and then I get up at the legendary “butt crack of dawn” to launch a boat and go out on the “Opening Day of Fishing Season” along with all the other die-hards, including father-in-law, Ernie.

Some people don’t get fishing. Others can’t get enough. I guess I was raised in a fishing family.

One of my earliest fishing memories was when I was about five-years-old and I went away for the weekend with my Uncle Chuck, Aunt Colleen and cousin Charlie. It was my first-ever time out on a boat and while I don’t remember catching any fish, I had fun. My uncle and cousin got a big kick out of watching me eat salmon eggs. I can’t explain why I did it, I just know that it happened because he told that story for years.

A few years later, I was in South Dakota visiting relatives when my late uncle James and my dad took me out on a boat and we fished the Missouri River outside of Mobridge.  They gave me one of those kiddie rods designed to keep a kid quiet and make him feel like he’s fishing. I ended up hooking and landing the biggest Northern Pike of the day. I remember asking for help and my uncle saying something like, “He’s gotta learn how to do it himself.” That’s pretty much when my personal addiction was confirmed.

Remember, I said I came from a fishing family. When we went back to South Dakotas for vacation, a Sunday afternoon thing to do was pack a picnic lunch and “head to a fishing hole.” While growing up, when we went camping (which we did most summers), family fishing was part of the adventure. I’d have to say that I had some luck passing along the curse, er, uh, tradition, to my kids. Both Christina and Tyson have fished over the years. Christina, her husband Ryan and the kids have been on fishing/camping trips. Tyson and yours truly actually slipped up to Alaska and Canada for some salmon-fishing trips and had a blast.

Yeah, I know that’s a halibut.

So, Saturday, April 28th, I will begin my day with father-in-law Ernie launching a boat on to Lake McMurray. Could be beautiful, could be a downpour. We’ll fish for a couple of hours, hoping to hook at least a couple of fish and then come back for the Fishermen’s Breakfast they put on at Norway Park. I think Ernie looks forward to the breakfast almost as much as the fishing.

Oh, and the fish we’ll catch?  How big do you think they’ll be?  Add on a couple of inches each time you tell the story and you could be a fisherman, too. Or fisherwoman. Or fisherperson. Whatever.

And the tradition continues….