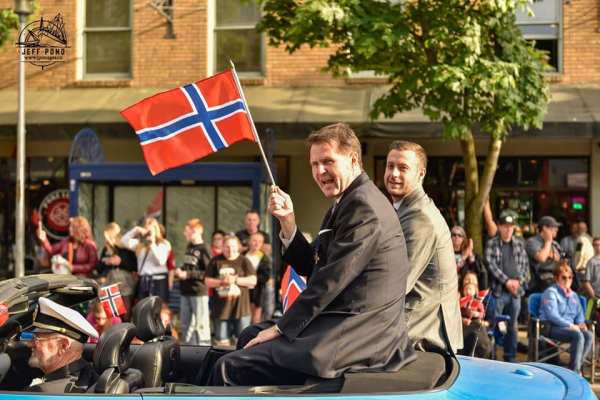 I had another one of those reminders again the other day.

Slow it down. Be in the present. Appreciate the now. It’s so easy to think, “I’ll be happy when _________.” But the truth is, when that happens, you find something else that puts off happiness again.

My wife & I attended the funeral for Kim Nesselquist on Monday at the Nordic Heritage Museum. It really was a Who’s Who of the Norwegian Community–Norway’s Ambassador to the U.S. was there, former Secretary of State Ralph Monroe sat behind me and on and on. But this isn’t about name-dropping. It’s about Kim and what a reminder his life was of living the right way.

If you knew him, no explanation necessary. If you never had the pleasure of meeting him (and you would know if you did), you missed one of the greatest human beings to occupy this planet.

Oh, sure, there were achievements and honors and awards. But what was always most important to him was his family. And doing the right thing.

It’s tough to lose someone at any time of year, but losing a husband, father and son at the young age of 63 is mind-numbing. The cancer that eventually claimed his life made for a long, slow, painful departure, but a time he maximized as best he could.

Nine months ago, Kim’s body crashed. It was the most terrifying night imaginable for his family as he flat-lined TWICE for minutes that felt like hours. Somehow, doctors were able to save him. But it was what he brought back with him that gave him the peace he needed to accept his destiny.

Kim said that while he was flat-lining, he felt an incredible peace. It made him realize how wonderful that next life would be and as much as he didn’t want to leave his family behind, it helped him in accepting a situation that was out of his control. He also remembered experiencing an earthquake while he was under, waking up to find doctors pounding on his chest.

I’m telling you all this because, basically, that’s what this season is all about. I’m not going to get all religious on you, but for me, Kim’s recollections of what’s to come gave me hope and peace. You know, like the “on earth” kind.

His daughter Elise bravely went up before the crowd of 600+ and delivered a collection of thoughts that conveyed what she wanted to say, but at the same time, honored her late father. It was one of the best, organized, heart-felt expressions of thoughts I’ve ever heard in a eulogy. Among the things she cited were the Paradoxical Commandments, which were news to me and boy, did they fit her late father’s life perfectly. So, I feel I must share them with you.

People are illogical, unreasonable, and self-centered.
Love them anyway.

If you do good, people will accuse you of selfish ulterior motives.
Do good anyway.

If you are successful, you will win false friends and true enemies.
Succeed anyway.

The good you do today will be forgotten tomorrow.
Do good anyway.

Honesty and frankness make you vulnerable.
Be honest and frank anyway.

What you spend years building may be destroyed overnight.
Build anyway.

People really need help but may attack you if you do help them.
Help people anyway.

Elise concluded the salute to her father with a pre-recorded video of her performing “What a wonderful world.”  She was able to share her performance with her father before he passed. The song will always have special meaning for her because it was one Kim performed for her when she was a kid, in his best Louis Armstrong voice. It was also the song they danced to at her wedding last year, during the Father-Daughter dance.

Whenever there was a Norwegian event, you’d see Kim there. I had the pleasure of grabbing beers with him a couple of times and we were blessed to be able and visit Kim a couple of times during his final months. Even as he fought his internal battle, his face would still default to a smile. Yeah, that smile. It’s the one everyone sees in their mind whenever they remember Kim Nesselquist and will continue to remember, for many years to come.

Thanks Kim for showing us how to do this life thing really, really well. Rest in peace.