I’ve become quite an expert when it comes to Facebook. For quite a few years. How many? I can’t figure out how to tell.

Experience has taught me a lot of things about this social media platform, so I thought I’d just put them all down into a handy collection for people to review occasionally and check to see if they’re doing it right.  There are some definite do’s and don’ts:

The key thought here: think before you post. There is a wealth of negative things out there right now. Why bring them to Facebook? Positive feeds on positive. I think you can figure out what negative feeds on.

For all of this country’s faults, for all the problems going on in the world, for everything not going your way if you were the global ruler, we’re all doing pretty well. Appreciate it.

And if you don’t, why drag it out into the social media arena for all to see?  Well, that is, until you become my next un-follow. 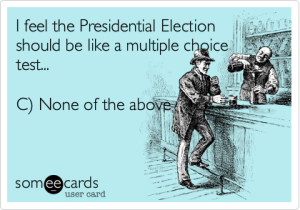 Here’s how it works: you post something on Facebook extremely negative, nothing more than partisan poison being passed around by the side that knows better and I ‘unfriend’ you.

I already know what’s coming.  The negative ads that take vague swipes at candidates using half-truths, quarter-truths and close-enough-truths invading my favorite TV and radio shows.  You know the ones I’m talking about—filled with an arrogant attitude that if you believe my way, you’re smart and if you’re opposed to it, you’re an idiot.

Just today, a very vicious attack on Hillary Clinton made it into my feed, which was just two news stories away from a childish name-calling meme about Ted Cruz.

This just in–it’s not funny, it’s not entertaining, it’s not what I want to be subjected to over the next year and a half.  Funny is one thing (and I actually know a thing or two about funny), but when all you’re doing is saying to your fellow D’s and R’s out there, “Hey, look!  I called him a Poopy Pants! Ha!” and you find that entertaining?  Let’s just say I’ve evolved.

In fact, I’m proud of the fact that I don’t vote party.  At this particular point in time, there is no one aside from Morgan Freeman that I feel is real presidential material out there.

So, back to the rules of the game.  Get it all out of your system between now and midnight.  Because as of April 15th, 2015, make a snide political comment or post a caustic partisan piece on this guy’s Facebook feed and we will be disconnected.  I’ll consider reconnecting after November of next year, but not until then.

It’s a free country, for both of us.  You have the right to be a raging partisan, but the constitution also allows me to confine my Facebook feed to beer bellied bicycle crashes and cats playing pianos.

Have a great election!  Oh, and congratulations to all of our winners.