So, for years, I’ve been the voice of a couple of parades–the Bothell Freedom Festival Parade and the 17th of May Norwegian Constitution Day Parade in Ballard.

That includes at least 15 years in Bothell and another 10 in Ballard. So, I’ve got a combined 25 years’ worth of farting around and making smart-Alec remarks about what goes on before me as the parade passes me by.

In Bothell, my co-hosts over the years have included Joyce Goedeke, Joy Johnston, Judge Michelle Gehlsen, Dr. Eric Murray, and Bothell Civic Leader Mike Rue. While behind the mike in Ballard, I’ve hung out with Dori Monson, M.J. McDermott, Karen Pauley and Bjorn Nalum. Yeah, you can tell by the rotating names, I’m hard to get along with. 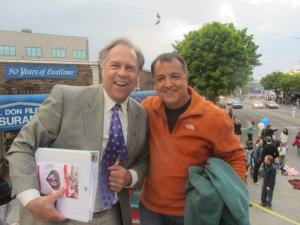 However, several weeks ago, I got the email that Bothell no longer needed my services and after a decade of doing the play-by-play for the city cable channel, I was officially retired. That’s fine. Time moves on and because of COVID, it’s been three years since the last time I had done a parade. I get it.

Now, normally, the place where I broadcast in Ballard over the loudspeakers to the crowd is where the judges make their decisions on who wins which awards, and it is THE place to be at the Syttende Mai Parade. But this year, things took a turn.

I was informed that my co-host of the past couple of years for the 17th of May parade was not going to be able to make it this year. Then, I was told the judges would no longer be based at my broadcast location, but rather an earlier stop along the parade route. So, it would be just me, on my own, from a new location in Ballard known as Bergen Place Park–I was still honored to be able to do it, but needless to say, my enthusiasm was dampened.

Then, I got an idea. A real Norwegian that I have a great rapport with, Ozzie Kvithammer, could be my new co-host. Slip him a couple of Aquavits and God knows what could come out of his mouth. He agreed, so brace yourself.

If you are planning to head down to Ballard for the big parade on the 17th of May, by all means, get within earshot of our broadcast to the crowd at 20th & Market and I promise, we’ll be at least entertaining. If nothing else, you’ll want to say you were there when we actually said THAT over the loudspeakers. The streets start packing in there around 4pm, the parade steps off at 6pm.

I’m down to just one parade, but I’m looking very forward to making this one really count.