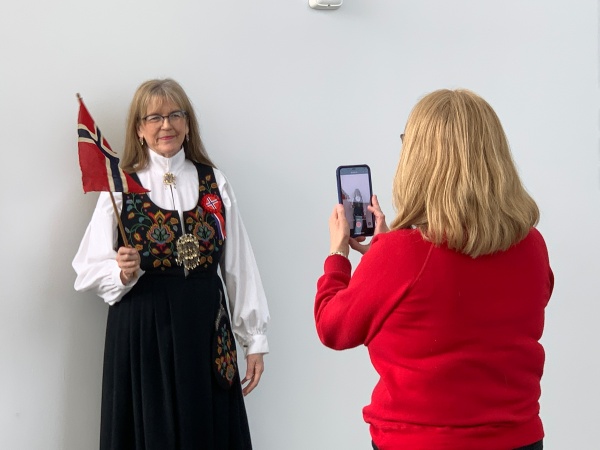 After a brief bask in the glow of my annual April Fool’s video for National Gullible Day, it’s time to move on to my next big project.

I really should look into smaller tasks.

What with the pandemic making events like luncheons and parades uncertain possibilities, next up on my ever-growing to-do list is taking on a virtual 17th of May celebration for Seattle’s own 17th of May Committee.

For those new to the party, the 17th of May is the day that the Norwegian community here in Ballard celebrates “Constitution Day.” A big deal in Norway, with lots of parades. In Seattle, we have been celebrating the occasion for over 100 years. In fact, that annual stroll down 24th and then a left turn on Market Street is the first Seafair-sanctioned parade of the Parade Season. You’ll also see it referred to as “Syttende Mai”, which due to my absorption into that community, I’ve become really good at spelling.

In a “normal” year (remember those?), there would be a luncheon at either the Leif Erikson Lodge, the Nordic museum or both, then after some live performances in Bergen Place Park all day long, the official parade would step off around 4pm. Or 6pm. It depends on whether the holiday falls on a weekend or not.

This year marks our second non-normal 17th of May in a row. So, the committee asked me to produce a virtual 17th of May luncheon at noon on the big day. The event is free if you’d like to tune in to the 17th of May Committee’s YouTube Channel. It’ll make its broadcast debut at noon that day. Afterwards, you’ll then be able to watch it whenever you want on that channel.

Tuesday of this week, I headed down to the Nordic Museum in Ballard to film some of the traditional festivities. I’ve got a couple of other folks grabbing footage and in no time at all, I’ll have a bunch of video to edit and assemble before May 17th. Right now, I’m feeling really good about it. Actually, having done the Norwegian American Chamber of Commerce‘s virtual Julebord last year, I pretty much know what needs to be done. 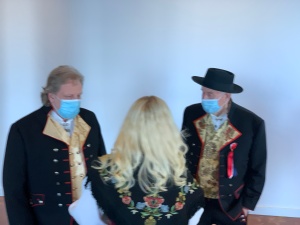 Some special guests you may

recognize without their masks

The jury is still out on whether they’re going to try and organize a car parade down Market Street, although a group of us organized one last year to keep the streak alive.

So yeah, here comes the next big project. I’m producing a virtual 17th of May celebration, in-between my many other duties. That’s my self-chosen life. I just like things being busy. I wonder where that came from?

For funsies, here’s my brother-in-law, Kris Templin, warming up for his performance of “God Bless America” with me playing my mouth trumpet.

OK, break’s over. Back to work.