Come on, who hasn’t seen “Castaway” with Tom Hanks? If you haven’t, you may be excused from this week’s blog. Well, OK, if you insist on sticking around, it was about a guy who survived a plane crash and lived on a desert island and befriended a volleyball named Wilson.

While attempting to escape his isolation, Hanks built a raft and he and Wilson took to the water. But after pushing himself so hard, he dozed off…and Wilson just floated away.

I feel like the Seattle Seahawks are about to lose their Wilson.

Yeah, it’s that dead time of year for football fans, months before the draft and even longer before the guys return to training camp. So, sportswriters try to keep your attention by putting things out there. For example, start with one team being interested in Seattle’s main guy, Russell Wilson. They’d never really let him go, right? Then, have Russell’s agent say that, if a trade is going to happen, it can only be to certain teams. Then have the mayor of one of those acceptable cities put together a video saying they would love to be his new home. 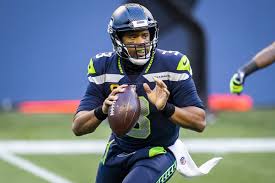 First off, Russell Wilson is a great quarterback. He’s already won a Super Bowl for this city and he could have won a second if we had just handed the damn ball to Marshawn. But what has been amazing to watch over the years is this team willing to risk their major investment just to save money with a piece-meal offensive line. I’m sure Russell, like me, watches Brady, Brees and other quarterbacks around the league actually having protection and not having to run for their lives on every play.

At least, that’s how it has felt over the years, so I checked. Russell Wilson has been sacked 394 times, an average of 43.8 sacks per season—more than any other QB since the 1970 merger.

The man has done so much for this city. He’s visited the Seattle Children’s hospital and the sick kids there every week since he arrived. He’s been a positive force, when negativity is so much easier. He’s been a role model, started youth programs, takes responsibility when the team doesn’t win and on and on and on.

And you’re thinking about letting him just float away?

That’s the tough part of being a professional sports fan these days. It is, after all, a business and decisions are not made on loyalty or quality or character. I completely believe that Russell has at least one more Super Bowl in him and I would love to have him bring home another trophy here. I’m not sure what I would do if they traded him away, or how it would impact my fandom.

Oh and in case I haven’t brought this up yet: get Russell Wilson an offensive line.