Like everybody else, I knew that former President Donald Trump would be acquitted in his most recent impeachment trial, and he was.

Not because he wasn’t guilty in the largest example of sedition and insurrection ever displayed by an American president, but because of his organized-crime like hold on the Republican party that he took over four years ago. The evidence of Trump’s guilt was damning.

I still remember when he rose to power, winning primaries when no one took him seriously. His timing couldn’t have been more perfect, as we had reached a ‘fed-up with Washington, D.C.’ stage in our country, where just enough voters were willing to take a risk on this wheeler-dealer and see where it would take us.

As an independent voter and open to either side (it’s all about the quality of the candidate), I spent the period of November 2016 through Inauguration Day selling myself on his promised fresh approach. He spoke of “draining the swamp” and running government as an outsider and I kept my fingers crossed.

Let us quickly fast-forward through four years of building a wall, harmful tweets that encouraged White Supremacists and racists to feel empowered and step forward, ignoring climate change, hiring and firing White House cabinet members and staff like he was running a Halloween Superstore, more maniacal tweets that made me question his sanity and starting early last year, months before the election, planting the seeds that if he somehow lost the election, it had to be rigged.

When you look at the mob that tried to disrupt the Electoral College vote confirmation on January 6th of this year, it wasn’t a lot of people. Let’s call it  around 2000 people. That is .000609 of the U.S. Population. What do we know about them? Here’s a start. But their actions were enough to put a real scare into all of us that our country’s democracy may be a lot more fragile than we had ever imagined.

Think of how unified our country would be right now if the attackers had been from a foreign country? We would all be calling for the death penalty and would look forward to locking those people up forever.

But these were Trump followers, blinded by his rhetoric. MAGA Confederate flag-waving racists, anti-sematic, hate-mongers that were fueled by the words of a sitting American president. He sent them, said he’d be with them as they marched to the Capitol building, and the carnage was launched.

Our Senators and the Vice-President had a front-row seat. It’s only luck that it didn’t get even uglier. Mitt Romney was this close to running into the mob, who were also chanting, “Hang Mike Pence! Hang Mike Pence!”

But even though seven brave members of the Republican party voted ‘guilty’, there were not enough votes to convict former President Trump of the obvious. How?

Some claimed it was unconstitutional, as impeachment was meant for someone currently holding office. So, like when they originally wanted to vote, but Senate Majority Leader Mitch McConnell said we’ll wait until the next Senate convenes? So, Mitch, you said you voted against Trump being guilty because of the vote that resulted from your inaction? And then, you came out after the vote and said he wasn’t going to get away with it?

The ‘trial’ was a mockery. If you paid attention, you could see Republican Senators checking their phones, not looking at the screen when videos were being shown, or being absent. If you want more details, read this.

Here are a couple of powerful memes. 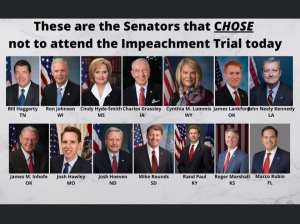 And this one helps anyone struggling with the concept of partisanship.

It saddens me that this many United States Senators sold their souls to the Orange Devil. Why? They knew if they crossed him, he’d seek revenge. You watch and see what happens to the 7 Republican Senators who were bold enough to do their duty and choose the U.S. Constitution over party.

So, you Senators in complete denial: Are you saying that a president can get away with anything during the final week or two of his term, because it takes too long to impeach him or her? Or, that only applies to Republicans?

We are all entitled to our opinions–that’s what makes this such a great country. But this display of ignoring the facts for saving one’s political bacon are about as absurd and disappointing as it gets.

Gazing into my crystal ball, I can tell you what’s going to happen, at least to Independent-minded voters like myself. The Republican party just died. If it’s the Trump Party (which last weekend’s voted demonstrated), your candidates are no longer even a serious consideration.

There’s talk of 100 or more Republicans spinning off and starting their own party, which would be more true to the original ideas before it was Trumpified. Of course, that would fracture conservative voters and make it very hard for a Trump Republican or a New Republican from ever winning another election.

Maybe this is what Trump meant by “Making America Great Again”: destroying the Republican party. Because that’s exactly what he has done.

Yes, Donald, you got acquitted for a second time. That may be great for your political donations and fanning the flames of that loyal fan base of yours. But I take a lot of comfort in knowing that, over time, we’re going to learn everything about what went on in your White House and during the final days of your reign of terror.

Because truth and history eventually wins out.

One thought on “Thank God For History”