At the beginning of next month, I’ll be in the window where I need to sign up for Medicare. I was just cutting classes at Torrance High School to go down to the beach and now I’m doing “Senior Stuff.” OK, well I guess that was Senior Stuff back then, too.  I’d just like to give AARP the credit for being the first to point out that I was getting old, because they hit you with junk mail about joining AARP starting at age 50. It’s part of your turning-50 birthday package.

But even though I’m crossing into that 65+ threshold, I’ve still got a lot going on. I’m multi-tasking more these days than I was in my 30s and 40s. My brain goes 100 mph because I like it that way and I fully expect, at some point, I’ll have to shut it off and just relax. But until then, I’m going to get my money’s worth out of it.

However, I know there are physical limitations. That gray matter upstairs can only store so much, so occasionally, I like to export a few memory files to this blog so I can let them go and free up the space for the new stuff that’s coming in daily. So, here I go again. Some deep dives of stories and tidbits that are currently buried in my brain, but are now being moved to the Internet for storage.

CLOSE ENCOUNTER OF A DODGER KIND

Back in the 1960s, I grew up in a baseball family. The Los Angeles Dodgers were our team and most nights, we didn’t sit in front of the TV, but rather listened to the radio as Vin Scully and Jerry Doggett called the play-by-play. On occasion, we’d get to venture out to Dodger Stadium, usually in the cheap seats, to witness a game live and in-person. I don’t remember how he got ’em, but one time my dad got his hands on some front-row seats along right field. As we’re sitting there, the guy next to us yelled out at Lou Johnson, the Dodger outfielder. The next thing you know, Lou came over and talked to the guy. He might have been 3 feet away, dangerously close by today’s social distancing standards. I sat there in awe, and listened to the conversation while staring at ‘Sweet Lou’. Being that close, it was then I noticed that part of his right ear was missing. Apparently, he had lost it in an auto accident years before. I understand that, these days, he’s still working with the Dodgers in community relations.

I’M LETTING THIS ONE GO, LAUREL

God bless you, Laurel Scherer, wherever you are. Back in the third grade or so, I attended Emmanuel Lutheran Church’s private grade school. The church we attended had a school, with probably no more than 25 students total, divided into two classrooms–grades 1-4 and 5-8.  The memories from those early years are gradually fading away, so I thought I better preserve as many of those stories as possible. I’ll start with Ricky Niemeyer, who I became friends with and then, one day, he just stopped coming to school. His mom arranged for him to come back for one more birthday celebration with his friends before losing his life to leukemia. Hard to believe with today’s medical treatments, but back then, leukemia was a death sentence.

At recess, we played on an asphalt parking lot because that was all they had. There were lots of dodge ball and kick ball games, using one of those red rubber balls. I should also mention Terry Smith, who went down in history as the first person ever to tell me a dirty joke. There was another kid named Paul. One time, I went over to his house to play and they served us hamburgers and this thing called mayonnaise. It was awesome!

But Laurel Scherer comes to mind for a couple of reasons. She wore braces which, back then, were a major commitment. I remember being good friends with her, although I probably damaged it that time I gave her a push to help avoiding being called “out” in hide ‘n seek and she went face-first into a flag pole, chipping her tooth. Wherever you are, Laurel, I’m sorry.

And one more Laurel story. I saw this happen and it just left an impression. I was standing in our play area, watching Laurel climb up the slide in her dress. Yes, back then, girls had to wear dresses to school. Well, she got to the top, sat down on the slide and began heading down. Only problem was, her dress caught on something at the top. All in one motion, she slide down the slide, leaving her dress at the top and the second her feet hit the ground, she made a beeline to the girls’ room.

OK, Laurel, that was it. Last time around for that story, at least, as told by me.

Around the 4th grade, the classes at Emmanuel Lutheran Grade School were big enough that it warranted adding a classroom. It was then that an attractive, red-headed woman named Mrs. Reese took over the class I was in. I had never really known a redhead until then, outside of the little red-headed girl in the Charlie Brown cartoons. I wouldn’t say I had a schoolboy-crush on her, but I can still see her vividly. A couple of times, her husband came to visit the classroom and I thought, “What a lucky guy!” Then suddenly, she was gone. I don’t know where went, but I do know she was no longer at the school. I eventually heard that she had gone through a divorce and, as awful as they are these days, back in the 1960s it was considered something you just didn’t do, especially if you were a woman. I just remember wondering, ‘How could someone so nice get a divorce?’ As I experienced later in life, it happens. 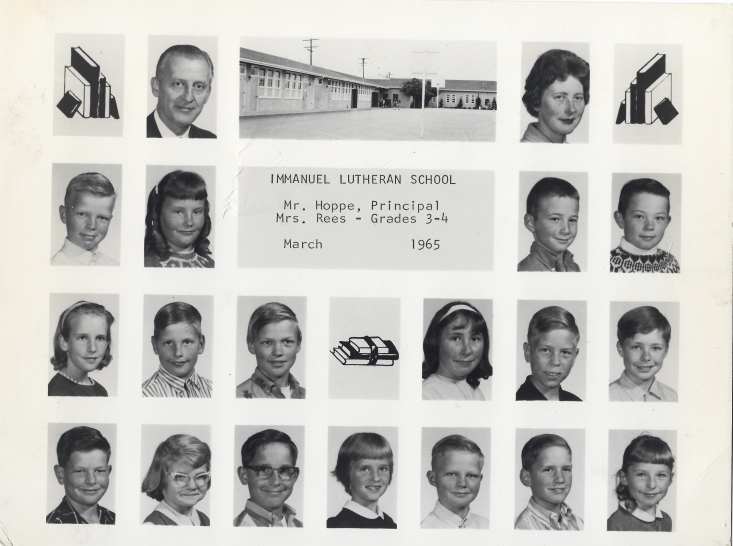 Wow, I look at the class picture of that year and I can pluck out first names of a lot of those kids: Carolyn, Thomas, Kerry, Dillon, Tim, Laurel, and Andrew.  To the rest of my classmates, I’m sorry those memories have already gone to the dark side.

OK, enough for this round of memory purging. I’m letting these go and if I ever want to think about those people again, I’ll just come back here. Or, I’ll ask you, since they’ve now filled up some of your space.