Over my decades of working for a living, I’ve met an amazing collection of characters. You know how when you reflect upon a certain period of time in your life, certain people suddenly pop back into your mind?

That occurred this week when I was notified of the passing of a former client.

Towards the end of my tenure at Destination Marketing, a local ad agency, I worked with a client called Leaf Filter, which was run by a guy named Mitch Reed.  Having a great radio name and the pipes for it, what I soon learned about him was that back in the day, he was quite the advertising guru for one of the major New York agencies. He enjoyed telling stories about those days and always included something special in all of our meetings: he smoked like a chimney.

We’re talking indoors here people, as in meetings where, if you sat anywhere near him during the meeting, you left their smelling like you had just come from a Marlboro test facility. Our agency wanted to keep him so badly as a client that we just smiled and didn’t say anything. The one time he talked about coming up to our offices, we knew he would probably light one up in our building and I was pretty sure no one would have the nerve to say something about it. He ended up not coming.

Even though in this day and age, it’s extremely illegal to smoke indoors in an office, the other Leaf Filter employees didn’t say a word. I remember at least three meetings where I came home, threw my clothes in the hamper and took a shower to get rid of the cigarette smoke.

In one of my earlier shoots as a director, we shot some footage at a fellow DM employee’s house. We produced some very nice commercials for Leaf Filter and, after stumbling across this video, I see that it was in 2010. Wow, almost a decade ago.

I haven’t seen or thought about Mitch for most of the last decade, so when I heard earlier this week that he had passed away, my limited assortment of memories returned. But one former co-worker was sent the inside scoop about Mitch’s life and I marveled as I read about this even more colorful character. So I thought I would share this very nice collection of memories written by his former wife:

Mitchell was a larger than life character and raconteur with a radio voice, sharp sense of humor and brilliant mind, who started his career as a radio broadcast journalist, but spent most of his career in advertising.

He was born and raised in Philadelphia, the son of Quaker and Jewish parents. The family business was Jacob Reed’s Sons, a clothing retailer with a 159 year history including outfitting the army and navy dating back to the Civil War. The flagship store on Chestnut Street that’s now a CVS Pharmacy, still stands as a historic building in Philly.

He was an athlete who was sought after by every MLB baseball team. Baseball was a passion but he was even better at hockey and played goalie. He would have loved to pursue a career in sports if his dad hadn’t talked him into going to college, so off he went to study at the University of Iowa School of Journalism, followed by an MBA from Fordham, which led to a career in advertising.

In advertising, he drove the creative for countless campaigns on Madison Avenue, many for P&G. When Listerine was the dominant mouthwash brand, he knocked it off its pedestal with Scope by forever associating Listerine with “medicine breath”. He would cringe if I said he’ll live on with his copy “Weebles wobble but they don’t fall down” but I think it’s true. Advertising and marketing was his craft and he could appeal to the consumers’ mindset better than anyone with simple, meaningful messaging.

He was a New York ad guy until he moved to Japan to lead global ad campaigns in Tokyo where we met. He was CEO of Grey Daiko Advertising and a governor of the American Chamber of Commerce of Japan. His insight into the Japanese culture and consumer allowed countless global brands to succeed in the Japanese market. He loved his time in Japan and made lifelong friends. We fell in love with Seattle and moved here 25 years ago because we wanted to raise our kids in the most beautiful place on earth.

It seemed nothing was ordinary in his life. He’d tell stories of riding in a limo with JFK, hosting Jimmy Carter in his home, spending months with Jerry Lewis or Peter Ustinov in Israel for UNICEF commercials, working with Muhammad Ali, Howard Cosell, Crocodile Dundee, Sigourney Weaver…

While with the American Chamber he met Bill Clinton, Henry Kissinger and several Russian diplomats. He knew many Russian hockey players from his hockey days so he asked after several players. Dropping Russian name after name sent the wrong message. Thinking he was sending a signal that he wanted to defect to the USSR the Russians started a dialogue. He thought they were being friendly until his friend who was a US Embassy “cultural attaché” AKA CIA clued him in on what was going on. The reality was he loved to chat with people.

He always had a soft spot for The Phillies and The Philadelphia “Iggles”, but he became an avid Seahawks and Mariners fan.

He traveled the world extensively and experienced more of life than most people which added to his story collection. He genuinely cared about people and would be the first to visit friends in hospital or check in if they were sick. In our last conversation even though he was recovering from a previous stroke, he was calling to see how I was since I’d been under the weather.

Not all ex spouses get along but we were lucky. Despite ups and downs we remained family and he became BFF’s with Paul DeMars. Every conversation I had seemed to include Mitchell asking where Paul was.

At the end, he went according to his terms. We had transitioned to comfort care and were told he would pass quickly. Sure. The chaplain said prayers. Mitchell wasn’t religious but we wanted to cover all bases so we’d asked for a rabbi too. Sadly she wasn’t available until the next day, so we were resigned to not having Jewish prayers. We started playing his favorite songs and braced ourselves for the inevitable. 12 hours+ and almost 200 songs later, I’d run out of songs and resorted to playing Christmas music, which of course is when the rabbi walked in. Did I mention he had a sense of humor? He went peacefully as she was saying prayers. The day nurse had just come back on shift and said that in 25 years he had never seen anyone hang around that long, let alone 12 hours. He must have liked the music.

He was an East Coast guy on the outside, but soft and sentimental on the inside and loved nature and animals. He was many things but more than anything he loved his girls, Erica and Sara. They were his pride and joy. He was an attentive, doting dad and best friend to both. Erica inherited his sixth sense for marketing, business and appreciation for advertising, as well as love of sports and cooking. Sara shares his passion for baseball, politics, current affairs, people and is a natural public speaker and debater. They both have his gift of gab, curious mind and love to travel and explore different cultures. They appreciate good food and wine. He loved the sea, so together they went on many cruises to Mexico, The Caribbean, Panama Canal, South America, Canada, Alaska. They were lucky to have the time that they had but when someone fills your heart with so much love, laughter, adventure, imagination, wisdom and bear hugs, the loss is immense.

We will miss him, love him and remember him always ❤️❤️

I have to say, I liked the guy, but when he quit being a client of the ad agency, he instantly transitioned to being just a blip of my past. Even though it took his passing, it was nice to be reminded about those couple of years when I worked with one extremely interesting person that I actually knew very little about. Until now.

I can almost smell the cigarette smoke. 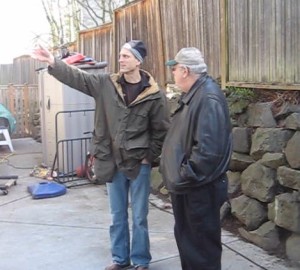 Chris Settle pointing out to Mitch

what we were doing next

One thought on “You Just Never Know”