Imagine you’ve had a Facebook page for your business for years. Then, one day, without warning, it disappears.

That’s exactly what happened to one of our Create Impulse clients a couple of weeks ago, Jack Carroll’s Skagit Hyundai.

It was a Thursday when I got a note from Corey, my advertising co-conspirator, asking what was up with their Facebook page after he received this note:

I had never had this happen before. I’m racking my brain, trying to come up with theories and possible reasons–maybe a customer got ticked off and went ballistic on the Facebook page to get it shut down. I was hoping that Facebook would give me an explanation.

Good luck reaching a human. It took over a week of getting non-answers and generic responses, thanking me for reporting it. One auto response said I should report the offending post. How could I do that when you took the entire page down?

I worked on the theory that maybe a disgruntled customer had gone on their page and written a bunch of nasty things, to get them kicked off. I would think that would get the post gonged, but not the whole site. I even found an extremely nasty review posted on Google the day before the page went down. It turned out it was from a guy who was denied a car because he was in the middle of a bankruptcy.

Bottom line: their page was history. All the photos, all the reviews, all the posts–gone. Let’s see, at the rate of a post a day for three years, that’s over 1,000 posts I’ve put up that just disappeared. And the more I pleaded with Facebook for an explanation, the more the generic messages came back. 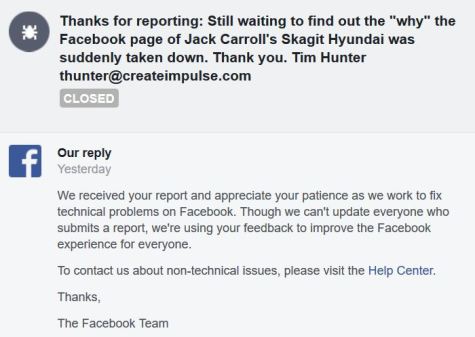 While I continued working on getting some sort of explanation from Facebook, I reached out to every resource I could think of–a contact at iHeartMedia who asked his expert, and a tech writer for the Washington Post that actually responded. All of them had never heard of such a thing.

As I looked for ways to crack the Facebook barrier, I finally found a link where I could chat with someone. I wish I could show you how that conversation went. The summary–apparently, when the car dealership set up their Facebook page, it was done as a person and not as a business. The FB rep said that they were clamping down on such pages and eventually, there would only be real people with non-commercial FB pages. A business would need to have a business page.  This blog recalls an experience from a couple of years ago that someone else endured, very similar to the one Skagit Hyundai had to deal with.

I asked Facebook if it would be possible to get the list of people who liked the page and I was told “No!” because they were “misled” to Like the page as “friends” and not a business. Oh, brother. I think I’ve used up my quota of quotes.

So, it’s back to ground zero. We’ve begun rebuilding the following of Skagit Hyundai. If you wouldn’t mind Liking their page and helping me boost the numbers, I would really appreciate it.  I’m doing the posts, so I try to at least make them entertaining.

or just search for them on Facebook: Jack Carroll’s Skagit Hyundai.

Is your business Facebook page a personal page? I would highly suggest you make the switch. Today.

Error: Twitter did not respond. Please wait a few minutes and refresh this page.