I’m uncomfortable being cynical. It’s an easy world view to adopt, because the world gives you lots of reasons to be that way. Maybe it’s because I’ve seen and know too much. I’m not smarter than anyone, but I’ve had experiences that have shaped my viewpoint.

I take it by now, you’ve seen the much talked-about Gillette ad, “The Best a Man Can Get.” If not, here’s your chance to get caught up.

Yes, a beautifully shot and scripted 2-minute film on what jerks men have been over the years. Men suck. They need to change. Their time is up!

Wait. Gillette. Isn’t that a razor company? They used to promise guys a close shave. Now, they’re the moral police?

To be clear, all the negatives depicted in the commercial are sadly true. The men and boys bullying and being sexist  exist, but they’re becoming more and more the exception. I’m glad the #metoo movement finally caught up with the major schmucks in Hollywood and the business world and finally gave some of them their comeuppance.  Highly successful achievers at the top of their careers, crashing down because their victimizing ways were finally revealed. It feels like we’re finally making progress in those areas, although much like all of our other social ills, we still have a long way to go.

What’s wrong with Gillette doing a commercial like that? On the surface, a good thing to do, right? So, you really think that Frank Gillette woke up one morning, and said, “All men are pigs and we need to do something about it!”? Or, during a strategy session at their ad agency, there was a conversation something like this:

“OK, so how can we reverse our falling sales numbers and get back at those jerks at Dollar Shave Club? Does anyone have an idea?”

“Well, maybe if align ourselves with a popular social issue, people will like us more and buy our products.”

“What about legalizing pot?”

“No. The stoners would cut themselves silly.”

“How about the #metoo movement?”

“Well, if we point out what jerks men have been and continue to be, then we can show them how they need to change. And once we’ve done that, they’ll owe us for shining the light on them and they’ll buy our razors!”

“But what if the guys watching aren’t really jerks and maybe made some mistakes over the years, small ones, but feel terrible and are already on a path of supporting equality and respectful treatment of women?”

“OK, then it’s settled. Let’s write up a commercial!”

So, I’m turning up the cynical gas just a little bit right now. Our world is on a fast-track of increasing available content. There’s a need to keep filling up those screens so you continue to spend over half of every day of your life watching one. You think I’m kidding or making that up? Read this.

Let’s follow the trail from the end result. What is the motivation behind what you’re watching or reading? Very few companies do things from the goodness of their hearts. Its done to move the meter, to get you to remember them or create an emotional attachment.  It’s the question everyone doesn’t want to be bothered with when they’re watching something on their phone, tablet or TV–what’s the motivation behind the content?

When you watch a comedy, they want you to laugh because then you’ll be back and the TV networks can sell advertisements and make more money. If you watched the evening news, they’re trying to jolt you and make you believe that you can’t live without catching their next newscast. Watch especially during February and the May ratings sweeps when you’ll see special reports aimed at their target viewers’ lifestyle. But at least in our household, that’s back-firing. At our house, our news-viewing time has plummeted because if we really want to know who murdered who, we can find that online any time of the day.

All this to say, before you allow a piece of video to make you feel something, consider the source and the motivation behind creating it.  Right is right and wrong is wrong, whether they make a video about it or not. Think for yourself first, and don’t let the media tell you how to think.

That’s basically how we ended up where we are today.

Is Gillette really spending all that money to produce a commercial and then buy all that commercial time with the hope of changing men and the world for the better?

We’re all being played.

PS Another great example of manipulation of reality happened last weekend. Here’s a nice recap worth a read.

PSPS  Have to share this Steve Kelley cartoon on the topic 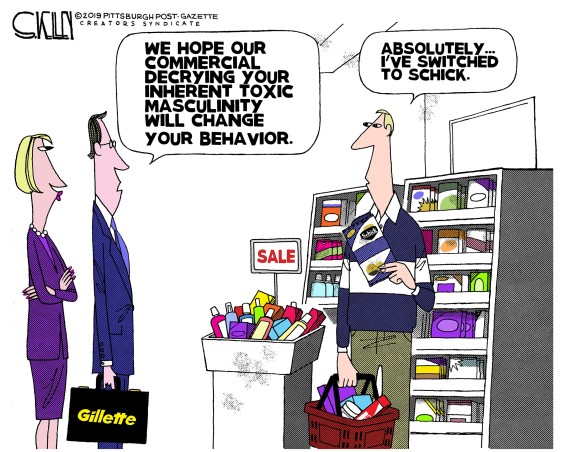