Well, these days, bullets pretty much fly everywhere, so let me rephrase that. I just went through an experience where there were a lot of red flags, but I just kept going and it all worked out. Let’s see if you would do the same.

Let me begin by saying I’m frugal. “Cheap” is such a harsh word. Frugal sounds more wise, that you’re being Ben Franklin-ish. “A penny saved is a penny earned”, that sort of thing.

So, when I was shopping the Internet recently to find the best rate on a rental car, I came across a lot of deals. One company I had rented from before and their pickup location was in the back of a hotel. A bit weird. And the last time I rented from this other one, the car smelled smokey. We get enough of that in Seattle.

It’s why this company I had never heard of before sounded like a new low-cost winner–Right Car. I looked ’em up online and they existed (it wasn’t an online scam), they were world-wide and headquartered in Canada. Canadians are trustworthy, right? So, off I wandered down the path of renting from them.  The reservation was made, I printed out the paperwork and we were set.

The big day came to fly to Los Angeles to celebrate mom’s 90th birthday. RIght Car was to have a Volkswagen Jetta waiting for us and we’d be off to mom’s.  Our jet landed at 10:30am, taxied until around 11am, we grabbed our bags and headed to the waiting area as described on the paperwork. And waited. And waited. Now, in Right Car’s defense, how were they to know that a moron would park his car at the airport with a bunch of movie prop grenades and guns which caused police to shut down Terminal One and put the airport into gridlock?  Needless to say, 45 minutes passed before the Green Line Bus arrived. Oh, yes, lots of other companies drove by (and several times) during that time, but Right Car didn’t have their own pickup shuttle. At least that came to the airport. We were told to take a city bus which delivered us to a parking lot around a half-mile away.

Apparently, this is a new thing. Rental car companies are popping up left and right, to cash in on all the people coming and going from a major airport. At this parking lot, there was a sign that said, “Right Car”, so we waited by it. One of the drivers who worked for another one of these pop-up rental places told us we had just missed their van.

So, we waited again. And waited. And waited.  One of the other people waiting with us decided to walk it, since it was under a mile away. We gave it 45 minutes until I summoned a Lyft, which took us to the car rental facilities in around 10 minutes for $7.

And this is where we arrived.

The building looked like something that Steve Martin would use to operate a movie production company, like in “Bowfinger.” Inside, a make-shift office with employees that seemed to know what they were doing. We did the paperwork and then headed out to the car. Everything seemed fine. Some nicks and scratches were noted. Nice trunk space. Then I closed the trunk and saw the license plate. 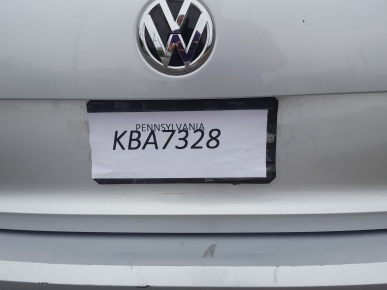 Yes. A paper license plate, printed out on someone’s computer. My theories were either the car was stolen, or the license plate had been. I went with the lesser and assumed this poor rental company had a license plate stolen from the car and they needed to keep it out there to make money.

What added a nice layer of “What’s going to happen next?” was that I lost my driver’s license at Sea Tac airport somewhere between the TSA check point and the gate of our flight.  Fortunately, I had my passport with me, so I could get to where I needed to go. Then again, I drove around L.A. all weekend without a driver’s license in a car that had a paper license on it. Yeah, I was pushing it.

When we went to the rental place to return the car on Monday, we discovered they didn’t open until 8am. And that was a slow process. We were finally able to turn the car in by 8:15. However, the driver apparently overslept and their van was not yet available. I got out the Lyft app, just in case. But she eventually arrived, we made it to the airport in time for a flight and there was a happy ending.

In the end, I have to admit, I dodged a bullet. There were so many things that could have gone wrong, and I ignored quite a few red flags. After arriving at SeaTac we headed straight to their wonderful Lost & Found department, where they had my driver’s license. It either fell when I was at TSA or someone turned it into them.

What have I learned? Stick to the reputable companies. It’s taken three such misadventures, but this one cured me. Yes, it’ll cost a little more, but the extra money you pay will reduce the stress of the experience which I believe will give you a couple of extra minutes on this earth in the long run.

And besides, when you stick to one of the major companies, they throw in real license plates on your rental at no extra charge.

One thought on “Dodged a Bullet”