Here we are again. We’re back to that time of year where “Back to School” is old news and people start saying “Where did summer go?”. Just a week remaining in August and football season is upon us.

But as you know, summer trickles away. You start to notice the cooler mornings and the dampness that sneaks into the evenings that wasn’t there just a couple of weeks ago.  We still score 80-degree temps during the day, but the nights start flirting with the 40s. A few weeks ago, I started making up a summer bucket list—a collection of things I’d like to do before we slide into fall.

One of those things was visiting the grave of martial arts legend Bruce Lee and his son, in an old cemetery in Seattle. Did it.

Earlier this summer, we actually did the Tillicum Village thing again. For outsiders, it’s where you hope on a ship, that takes you and 100+ tourists out to Blake Island where you enjoy a taste of the Native America lifestyle. Some dancing, smoked salmon and such. I had not done that in at least three decades. Another checkmark. 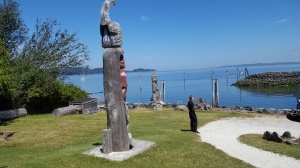 Something I have done that I’d highly recommend is to head up to either Bothell or Kenmore and go for a kayak ride. A guy I met through the Bothell Chamber started What’s Up Board rentals and he launched a booming business. What a wonderfully calming getaway.  $15 + tax gets you a one-hour rental to go up and down the slough or explore the shore of Lake Washington and really, that’s all you need. I know there are die-hards that make a career out of kayaking, but it’s one of those things I enjoy, but it will have to settle for when I have time.

When I did finally make the effort to head north, I pulled up into the Bothell Landing, walked over to the stand and explained I had no idea what I’m doing. The kids working there were great and apparently, not knowing what you’re doing is a pretty big club. So, it’s OK. You don’t have to be a pro, they set you up, help you get in to your kayak and off you go.

One employee told me that if I was to fall in, it would probably be when I was getting out. Eventually, I saw what she meant, but the darn things are actually fairly stable. I had brought along my swimsuit, so I ran over to the restroom, changed, then put my phone and car keys in a reseal-able plastic bag and I was off.

I had a relaxing blast.  The quiet. The birds like ducks, geese and blue heron.  I saw one kayaker pull up her craft next to the blackberries hanging over the water. But for that entire 60-minute stretch, there were  no emails, no disturbing Facebook posts–it was flat out relaxing.  My goal now is to work in one more adventure before the summer is through and drag along my wife, Victoria.

As I got back on shore, my wheels immediately began spinning, imagining that I had discovered my new sport.  Something I could do a lot and on a regular basis. Hmmmmm, I wonder what a kayak costs?

Well, I did the research.

You can go inflatable (cheap) or make it a plastic one, then add on a roof rack to help you get it there and I’m rounding it out to around a $1,000 investment.  If I were to just stick with renting one for under $20, that would give me 50 rentals. Get out twice a year and I’d be able to just rent a kayak for the next 25 years.  I look at the golf clubs sitting in the corner to remind me that best intentions don’t always turn into actions. Tell that to the smart-alec who wrote “1883” in the dust of the elliptical machine behind me.

If you just can’t make it out this summer, put it on your Summer 2018 Bucket List.  But if you do manage to work it in and give it a try, you’ll thank me for the recommendation. Maybe when we’re out on the water together.