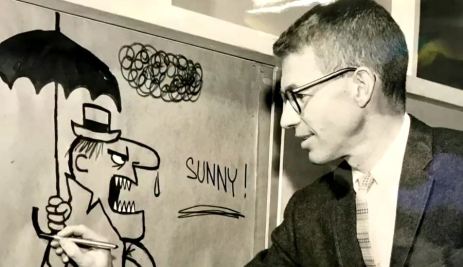 If you lived in Seattle back in the 1960s, your routine after work probably included coming home and turning on your black-and-white television to catch the evening news. After a few local headlines, the KING-5 news anchor would toss it to the weather guy, Bob Cram. Bob was a plain-looking sort of fellow with glasses who had a niche in the weather business–he included his cartooning skills in the forecast.

By the time I arrived in the Pacific Northwest, Bob was in his post-weatherman days, but remained a local personality. During the early 1980s, I returned from my 3-year Yakima exile to Seattle and became Larry Nelson’s producer at KOMO Radio. Part of those duties included being back-up production guy, which meant I would often find myself in a recording booth, engineering for the people who had come in to record their commercials. It was thanks to that Fisher Broadcasting side-job that I got to meet Bob, along with his daughter Sara, Husky Football Coach Don James and his wife Carol, Rainer Rey, and even the voice the Mariners, Dave Niehaus.  Dave would sit down to record the latest Brooks-McKnight Chevrolet commercial and let out a “My, oh, my” but not without taking the time to talk with me about baseball, last night’s game or what he had been up to in the off-season.

When I first got back to Seattle, Bob Cram was the voice of QFC. In time, Bob and his daughter Sara, did a tag-team version of the spots. Then, they were replaced by Carol James and Rainer Rey and that was the last I saw of Bob.

But while he was the grocery chain’s spokesman, I remember him coming in, being revered as “THE Bob Cram.”  A story he told that stuck in my mind was the time in 1965, when Bob was with Frosty Fowler and his morning radio show at the top of the Space Needle. How Seattle can you get?  Well, that particular morning, Seattle had an earthquake that registered 6.7 on the Richter, killing seven people and causing $12.5-million in damages. Bob and Frosty found themselves being waved back and forth atop the Needle, with seconds feeling like hours until things finally calmed down.

Bob Cram was soft-spoken, talented and had a great run. He continued drawing all the way up to his final days and it wouldn’t surprise me if a bulk of his work doesn’t end up at the Museum of History & Industry. I feel very fortunate to have briefly met and worked with one of the good ones in the biz. Here’s a nice look back from KING 5.

Bob passed away last week at the age of 91. Comfort and peace to his family as we all say goodbye to another face from old Seattle. 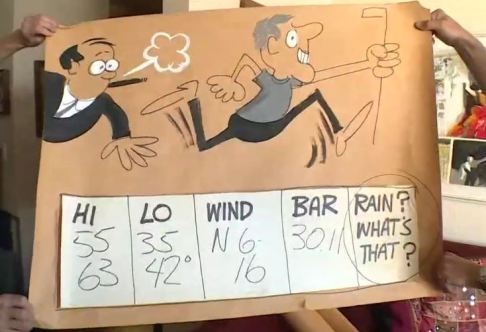