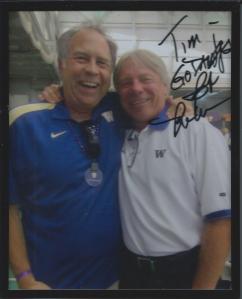 This next season of University of Washington Football is going to be a special one.

Coming off last year where they were part of the top 4 teams in the nation, that’s a tall order. But what’s going to make this year incredibly special, regardless of the Dawg’s record, is that it will be the final season for the “Voice of the Huskies”, Bob Rondeau.

I am and will always be so grateful for the path life has taken me. One of the more scenic detours was getting a phone call from a low voice over in Seattle, wanting to know if I had an interest in being his producer. KOMO radio news guy Bob Gillespie was over in Yakima visiting his in-laws one day, heard enough of me one day to suggest to KOMO morning guy Larry Nelson that we should talk, and the rest was history.

As Larry used to always tell me, if you want to make God laugh, just tell him the plans you have for your life.

Two weeks away from being married, I accepted a job that started the Monday after the honeymoon.  That meant getting hitched in 10-below weather, going over to Seattle to find a place to live in a 3-hour search, going on the honeymoon, coming back and then moving over through the snow-covered passes in a truck with bald tires.

But it was so worth it.

Among the personalities and friends I got to know during my  4-1/2 year stint at AM-1000 was the KOMO Sports Director, Bob Rondeau.  Bob was the morning sports guy, while a fellow named Gary Johnson was the afternoon sports anchor.  Years before, in the Midwest, their roles had been reversed. Gary was the main guy, and Bob was his second.

To this day, if I bump into Bob Rondeau, it’s mere seconds before a pair of dueling Nixon impressions breaks out.  For a while (until management forced us to stop–they felt it was disrespectful. Yeah, to a guy who resigned in disgrace), I would call up Larry in the morning and chat with him as “Mr. Former”, as if Richard Nixon was a fan of the show.  Man, did we have fun. Our GM fought mildly for us, then brought out the white flag and the cease-and-desist went into effect.

While Bob enjoyed the big-time job of calling all the Husky football and eventually, basketball games, KOMO wanted to expand their reputation as “Your Husky Station.” So, to pad our part, we developed the whole “Tailgate Party” show concept, with Lar having fun, playing the Husky Fight song or Tequila over and over, while I produced bits to play in-between all that.  One of the recurring features we did was something called, “Special Times”, where Larry and Bob would talk about the game, what it all meant, all the while walking as close as they could to the silliness line.

Bob Rondeau was Bob ‘frickin’ Rondeau. He still is. But Bob always treated me as an equal, a friend and just another member of the KOMO family.

I attended the University of Washington from 1973-77 and have absolutely no clue who did the broadcasts back then. The only “Voice of the Huskies” I’ve ever known has been Bob Rondeau. It’s going to very strange to not have him up in that broadcast booth a year from now.  I have a feeling I’m going to be listening to radio broadcasts of the game a little bit more next season.