I found a video.

Putting on my Department of Responsibility hat for a moment, I need to tell you a couple of things about this particular piece of production.  First, it could very well be propaganda. I’m sure some folks will discount it that way. But when I watched this a first time and then a second, outside of more F-bombs than a deluxe Rap Music CD collection, the guy says a lot of things I had thought or can agree with.

Where I wanted to go this week was last weekend’s Women’s March. A lot of women I know took part, or wish they had and, never being able to say “I know what you’re feeling”, I defer to you guys. I understand why you marched, but I have this deep fear that you were being used.

Now, before I continue, here are most of my major political stands:

All that being said, I fear that the Women’s March was just the latest desperate act of the Democratic Party to someday get back in power.  Sadly, the last election didn’t go their way, there’s fighting within the party, no direction and so they’ve implemented the strategy of “Let’s help Donald Trump vilify himself even more!”

OK, now I’m going into this further than what I planned. When you want to unite people, you identify or create an enemy. There were rumors that FDR allowed the attack at Pearl Harbor so that he could go to war. When the Monica Lewinsky story broke, President Clinton bombed Libya because Moamar Khadaffy was suddenly a major threat. There’s Bush and the 9-11 thing. And now, because the Democrats have lost both houses and the presidency, they need to get people completely bent out of shape and so miserable that they’ll only vote for people with D’s near their name next election.

The ideal is that women around America banded together and gathered organically to show their strength and unity. Well, there was that….but there was also the full support of the Democratic Party. Among the sponsors (whose name appeared on the banner in D.C.)–Planned Parenthood! I even got an email promoting attendance and a follow-up, thanking me for attending, from one of the hopeful candidates in 2020, Martin O’Malley. 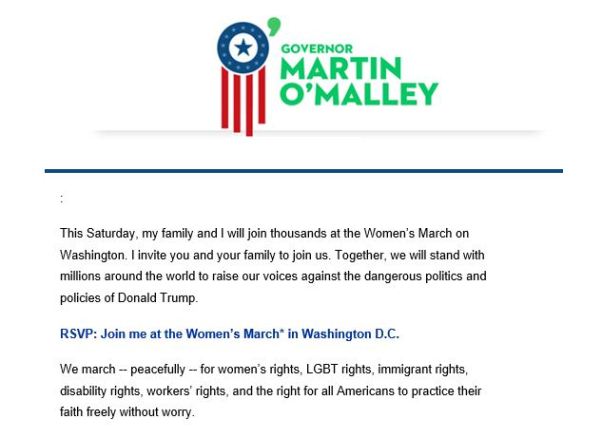 Now, back to that video. I don’t know who the guy is, but I’m assuming a British broadcaster who just let it fly. OK, I Google’d it–He’s Jonathon Pie, a UK reporter. This was originally recorded shortly after the election. Again, F-bombs coming, but he’s so spot on, it hurts.

Let’s talk to each other. Let’s communicate, not exasperate.

I’d like to believe that we can work together and make America civil again.