Growing up in the 1960s, I was very much aware of the racial struggle going on in America. Those were the days of Civil Rights Marches, the Watts Riots, George Wallace and areas of the country that still embraced segregation.

Decades later, I find myself in a country where we elected a black president to two terms. Where racial barriers seemed to be finally starting to fade.  At least in my immediate world and my family and friends, racial bigotry is unacceptable and not a part of our lives.

However, things are broken. Young black men are being gunned down or killed while in the custody of police. There are no excuses. That is unacceptable and we need to take steps to prevent future such events from happening today.

Last weekend, a washed-up NFL quarterback decided he’s going to help solve the racial problems in this country by sitting down during our country’s national anthem.  To me, that act is similar to pouring gas on a fire hoping it will go out.

A friend on Facebook just posted that what Kaepernick did was “brave.”  Oh, brother. How we modify the words to make us feel better about things. I remember when brave was going into a burning building to rescue someone or bring back a wounded soldier from the battlefield.  There’s no way you can convince me that sitting on your rear end in a disrespectful gesture and then attaching it to a cause is brave.

Then you’ve got one of my all-time favorite basketball players, Kareem Abdul-Jabar defending Kaepernick and saying that if we have a problem with what Colin said, then WE are the ones who don’t know what it’s like to be an American.

Stop it right there. I’ve hit my maximum tolerance level of people telling me how to feel or interpret anger or disrespect because I don’t understand. I get it completely.

Colin Kaepernick is the farthest thing from a great American and we won’t even get into his ability to be a good football player.

It’s been brought up that the great Jackie Robinson took a similar stand in his autobiography and, after checking into it, that’s absolutely true.  However, that’s where the similarities end. Jackie actually lived that struggle and had amazing success in spite of overwhelming obstacles. He had to battle hate from racist Americans, teammates that didn’t even want to play with him, death threats and in spite of it all, he played Hall of Fame style baseball.

Jackie had every right to be bitter towards a racist country that made his life a struggle.

But we, as a nation, are trying to evolve.

I look around at the shootings going on around the country and it’s like we’re back in the 1960s again. America is not perfect, absolutely not. But we collectively strive to make this a better place for everyone. With 325-million people all having a different idea of what exactly that would be, you know there’s going to be compromise.

Colin Kaepernick is a classic case of the ugly American. Ungrateful, pompous, conceited, entitled and so many other adjectives. He was a mixed race kid raised by two white people who excelled in a sport and rode it to the top. But last year, he struggled. He far under-performed his gigantic salary and now rides the bench, hoping to come back. Maybe there wasn’t enough struggle in his life, so he could better identify with those who didn’t have it as good as he did.

The bottom line: there are a billion ways to help make this country better and causes to get behind other than being disrespectful to his nation and then, call attention to it to make sure we all noticed. By the way, Kaepernick had sat down during the first couple of pre-season games for the anthem, but no one noticed.

Colin, let me help. You could:

Right now, you’re going to all the trouble of just sitting down for two minutes and calling that your noble cause.  Maybe it’s the money and comfy lifestyle that has warped your thinking.

There will always be rude, ignorant people on this planet. Colin just reminded us that they come in all colors, shapes and sizes and it’s up to us to dismiss them.  He’s gotten a lot of attention this past week. This blog will be the last he gets from me.

I could go on and on, but the sportscaster below, Tomi Lahren, has done a remarkable job of saying what I feel.  I have no idea who she is, but I’m completely impressed by her words and message.

Somewhere along the line, being patriotic and proud of one’s country became “not cool.” At least, to some people. Not me. Take a look around the world and what you’d have to give up in order to live there. Why do you think, in spite of all of our problems, millions of people keep coming here, year after year?

Thanks for speaking for so many, Tomi. Colin, for you, one word: karma.

PS–Oh and one more thing. 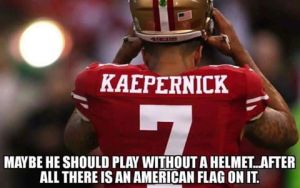 2 thoughts on “It’s Getting Really Old”