Yeah, for me, May is an insane month.

Now, it’s a GOOD crazy.  But we’re talking everything from Opening Day of Boating Season, being the auctioneer at our church auction, Mother’s Day, birthdays including my wife, my granddaughter, my aunt, my sister-in-law, my father-in-law and several other family members. Yes, later in the month, Memorial Day officially kicks off summer.  But smack dab in the middle of May is Syttende Mai–Norwegian for “the 17th of May.”

Lots of people see a bunch of Norwegians (and by the way, reminding you that I married into all this) celebrating a holiday and think, “Oh, it must be Norwegian Independence Day.”  Actually, the holiday is in celebration of Norway’s constitution, which occurred before it became an independent country in 1905.

Seattle has been celebrating Syttende Mai longer than Norway has been a country.

Our personal celebration has evolved into a two-day party based out of a Ballard hotel. We move in the night before, use the place as our headquarters, play a little home-town tourist and just have a great time with friends.

To that end, I thought it might be fun to take you along on this year’s adventure, so here’s an audio highlight reel of some of the sounds and people from the Syttende Mai celebration in beautiful Ballard, Washington.

Hope you enjoy it and maybe we’ll see you in Snoose Junction next year! 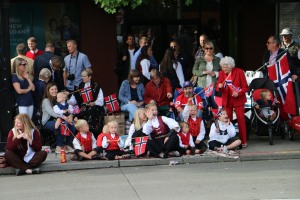