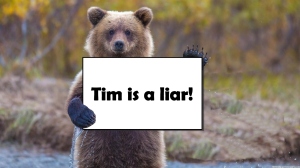 You can now rent “The Revenant” and so, in the near future. we’ll make the commitment and plow through that Oscar-winning movie.

My wife, Victoria, and I try to get out and see as many of the Oscar-nominated films before the big night each year, but that one kept getting bumped to the bottom of the list. The next thing we knew, we were just out of time. So we promised ourselves, “We’ll rent it when it comes out on DVD.”
When you wait that long to see a much talked-about movie, you hear things, you read things. SPOILER ALERT—I’m about to talk about what I heard that supposedly happens in the movie. Not necessarily things that do happen, but the rumored plot lines that seeped my way.
When you’re trying to psych yourself up to see a highly-awarded movie, the rumor that Leonardo DiCaprio was raped by a bear, or had to hollow out the guts of a horse to spend a night there (imagine how the horse felt) just made it a little harder to push that button at the Redbox kiosk.
At this point, we still haven’t seen the movie. I know it’s out there. We will rent it eventually. But until that time, when I think of The Revenant, I think of the bear, which takes me back to a week-long vacation when I was five-years-old.

I grew up in a Los Angeles suburb called Torrance, nestled in what they call the South Bay area.  When I was but 5-years-old, my Aunt Colleen, Uncle Chuck and cousin Charlie invited me to come along with them one week to their cabin in the mountains.  The place where it was located? Big Bear Lake.
I have spotty memories of that week, but here are the few things I remember:

I was pretty low key after that—hurt and embarrassed. To make matters worse, a huge scab formed on that cheek. Upon arriving home, my parents were informed I had slipped at the pool and scraped my face. That was pretty much a non-event.  But what would I say to the neighborhood kids?  I can’t tell you how the mind of a 5-year-old works, but my brain decided to tell Glen, Karen, Kelly, and both Mikes that I was attacked by a bear. After all, we were up at Big Bear Lake.  It must have been by a big bear, right?

Did they believe me?  Maybe for a while. Maybe not. I know I tried to sell it.

Doing the math, that incident probably took place during the summer of 1960. Over the years, the scar has faded away and the story went to the back of my brain until The Revenant reminded me of my own personal bear attack.

So I guess Leo and I do actually have something in common—a bear attack that didn’t really happen.  Only he’s the one that gets the Oscar. Yep, kid actors don’t stand a chance.