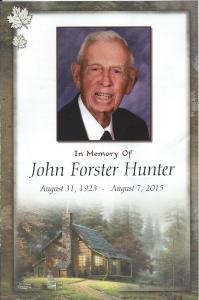 Losing a family member is one of the most painful things you’ll experience in this lifetime. This past month, my dad went home to his eternal reward. If you’ve read the past couple of blogs, you saw how a difficult thing was made even tougher by situations and people obsessed with their own self-importance.

We all know life will have its rough spots and, as you’ve often heard, “what doesn’t kill us only makes us stronger.” That is SO true. If there’s anything to be learned from an experience, embrace it.  Down the road, it will help us either avoid situations or make the difficult ones easier to navigate.

Prime example—back when I owned a boat, I was on Lake Wenatchee with the kids when I decided to take a shortcut. My prop hit a rock in the shallow water, the shaft was bent and $2800 later, I had the boat all fixed up enough to sell it.  I won’t be taking shortcuts in unknown waters ever again. A lesson learned.

With my father’s passing, I observed and witnessed several things that I’ll offer to you, hoping to spare you the learning curve and perhaps, making it just a little easier to get through that challenging stretch of your life.

Here’s what I learned:

My parents were smart.  They bought a pair of cemetery plots back in the 1950s for $170.  They made $6 a month payments until they owned them.  Today, they would sell for $14,000 EACH!  A pretty good return on your investment.  If you’re planning cremation, much simpler.  But if you wanted to end up in the ground somewhere (and, you could always change your mind later and sell your plots at a much higher rate), now is the time to buy.

They also did the pre-paid funeral plan.  Back in 2001, mom and dad both picked out their coffins, the type of service they wanted, everything.  Yes, it’s morbid, people don’t like to think about that stuff, etc….but it saves the family so much agonizing over which $7,000 coffin to buy….what would mom or dad want, etc.  Upgrades and alternatives were offered, but we stuck with the pre-approved plan because, after all, that’s what dad had wanted.

I’ve never been a fan of open casket services.  The person just doesn’t look right. However, I believe that the amount of time I spent at the viewing and the open casket funeral service really pounded home that this was real, that it was dad’s shell and not him. He was in a much better place now, at peace and without pain.  I guess, in a way, it helped make his passing more real.

Airlines vary in how they handle flight changes based on bereavement. Alaska Airlines changed our return date with no questions asked and no fees.  While United Airlines charged $50 per change and wanted proof sent to them.  A consideration if you have long-distance travel as part of being there. Like they say, “check with your airline.”

There will be times when you feel you have to fight for everything—don’t give up.  That’s what they want, that’s what they hope for, but don’t let them have it.  We were told that our father’s body wasn’t going to be released to the mortuary and would spend the weekend on a slab in the morgue like a common criminal because he died on a Friday and a hospital employee “just couldn’t finish all the paperwork by 4pm.”  Unacceptable.  Not negotiable. UNACCEPTABLE!  We found out this fact at 2pm.  We argued on the phone with a hospital employee, then went to the hospital to further argue our case.  By going over her head and being there (even after a phone call that claimed it had all been handled and it wasn’t), our father was released at 4:45pm.  Most people probably would roll over, or are grieving so much they just don’t want to take something like that on.  Not the Hunters.

In buying flowers, you’ll get so much more (and pay less) if you go to a floral wholesaler. Google ‘em, you’ll find one nearby.  Yes, we had to drive a little and pay a delivery fee, but we were able to choose some stunning floral arrangements from mom, the kids and the grandkids and great grandkids.

Oh, and people will say things.  Wrong things. Uncomfortable things.  They are not intended to be mean or insensitive, but other people are having a tough time with the passing, too.  They care about you, so they feel they need to say something and the words that come out are far from helpful.  Just hold your outrage, nod your head and process it later.  A great example: While waiting at the funeral home, one of the employees came out and said to us, “Oh, you all look so sad.” Ya think?  Another well-meaning friend who had an elderly parent that needed lots of care sent me a private Facebook message.  In fact, here’s what she said: “At that age I’m sure he was happy to go and maybe ready too.”  Even if that was true, not the time to say it and I really don’t want to hear it.  Especially from a non-family member.  Or even from a family member.

Those are the headlines. Just a few of the lessons learned after my father’s passing. I hope something in there helps you better understand a few things when the time comes for you to go through the loss of a family member.