Over a year of planning later, the big weekend had arrived and it was time for my step-son Nick and his fiancé Samantha (“Sam”) to get married.  The rehearsal dinner was awesome. On wedding day, the weather was a tad hot, but nothing could ruin this beautiful celebration held at the DeLille Winery in Woodinville.

The following day, Nick & Sam tore into their wedding presents in front of a small gathering of close family. All went as expected until this one gift.  We’ll continue telling the story after this video.

Recently, while clearing out our downstairs to make way for some plumbing work, I came across a “Photo Carousel.” A wedding gift we had received when we were married almost 8 years ago.  It was a cool piece, but there wasn’t really a place for it in the house.  So, we thought we’d just hang on to it.

When I saw it, I immediately thought how funny it would be to give it to Nick & Sam, but to mess with them a little and say it was from someone named “Carl & Bonnie.”  So, I wrapped it up, bought a card and signed it using a couple of names I was sure wasn’t on their wedding list.

Being a very organized bride, the night before the honeymoon, we got a phone call from the couple trying to figure out who Carl & Bonnie were.  So they wouldn’t waste any of their honeymoon time dwelling on it, I called and did the reveal.

Yeah, I’m a prankster. This is news?

So, once again, congratulations Nick & Sam, on taking the big step.

From all of us.  Including Carl & Bonnie. 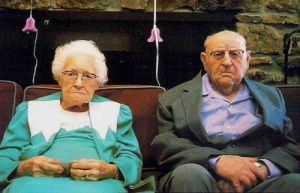 Carl & Bonnie, excited they didn’t
have to buy a wedding present