Probably, the closest I ever came was to be within 25-feet of someone who eventually became a world leader.

It was 1966. I was 11-years-old, had my Sears version of a Sting Ray bicycle and was fearless. It was a time when kids could run around Southern California without fear of ending up as a storyline on C.S.I. or Cold Case. We’d do what kids do until Kelly Toman’s dad put his fingers together and let out that dinner whistle around 6 o’clock. That was our cue that another day of playtime was nearing the end and we’d all scatter home.

One Saturday that year, my friends all seemed to be busy doing other things and so I found myself on my own, riding my bike. I had heard that a guy who was once a Hollywood actor was running for governor and he was going to be over in the Sears parking lot, around 4 blocks from where we lived. On a bike, that was just two minutes away.

So, I rode over and there, standing on the back of a flatbed truck, decorated with lots of red, white and blue, was none other than Ronald Reagan. OK, I saw him. I listened for a while. I even got pretty close to get a good look. Then, I grabbed a couple of buttons and bumper stickers and rode towards home.

Yeah, one of those!

Flash forward to this week. I now live in Seattle, Washington, and thanks to my wife and her many Norwegian activities, I’ve been invited to three different affairs this Friday, where I will be in the same vicinity as the King of Norway, Harald the 5th.

It begins at a barbecue, followed by a gathering in a nearby Norwegian-themed park and then, it’s off to the formal dinner at the Seattle Sheraton. One of my Norwegian buddies suggested I get a press pass, so I could take lots of pictures, which I would have been doing anyway. But that should give me great access to capture some pictures of this momentous occasion. I’m particularly anxious to grab lots of shots of my wife Victoria who, thanks to her involvement in restoring the mural at Bergen Place Park, actually gets to introduce and shake the hand of said king.

It’s going to be a very special day for all of us and I really don’t want to do anything that might ruin it for everyone, especially my wife. I promise I won’t point out he spells his name wrong.  I won’t ask what the V stands for in Harald V.  And I’m definitely NOT showing up on my Sting Ray bike. Although, I admit, the idea did cross my mind. 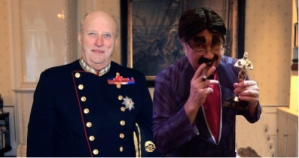 Wish me luck! Pictures to follow on Facebook and maybe a few special ones posted here next week.