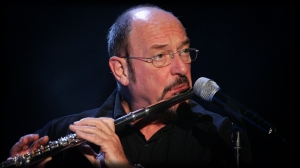 He stills plays a mean flute

The late 1960s and early 1970s were my formative years. I had emerged from a small private Lutheran school, survived 7th & 8th grades at my first-ever public school and then went off to Torrance High, followed by the University of Washington.

Along with me for the ride was a rock group called Jethro Tull.  They were less pop than the big groups of their day and their music found itself more on the new FM radio stations that began popping up.  Hard to believe there was a time when FM was new, but I was around to see it.

There were a lot of groups around those days, trying to impress the rebellious youth of that era.  Ian Anderson, the lead singer of Jethro Tull was this long-haired, almost homeless-looking bearded wonder, who sang with a distinctive voice AND played the flute.  Throw in lyrics like, “Snot is running down his nose” and how could a junior high boy turn that down?

I’ll be honest: I wasn’t aware of most of their music.  I knew of “Aqualung” because of a friend’s older brother.  “Locomotive breath” and “Thick as a brick” made it to Top 40 and some of those new FM stations, but other than that, me and their sound were casual friends at best.

But I always had a high appreciation of Ian’s musical talents—I mean, a flute in a rock band?  He made it work.  Their albums broke the mold, with story-telling, poetry and you just didn’t know what you’d be getting when you took one for a ride.

Last Friday evening, a packed house at McCaw Hall enjoyed the present and the past of Jethro Tull.  Ian Anderson led a very talented group of musicians, playing music from their album.  Then, because they couldn’t call themselves Jethro Tull, they “played the music of Jethro Tull.”  With Ian’s voice, it was them.

How are they doing? Well, time has taken its toll.  Ian and his flute are still a power combination, although his voice started strong and then faded as the night moved along.  That’s why he has with him a second vocalist, who alternatives lines throughout the performance, to keep it strong.

One thing they did as well as anyone I’ve ever seen in concert: they connected video on the screen behind them to the performance.  As Ian sang in real life, video of him singing that same song many years and lost follicles ago played on the screen.  It was a solid night of entertainment.

I felt like we were lucky enough to catch Ian and the band on their near-to-last call.  I enjoyed some of the new songs, but I’ll also be downloading some of those classics for some personal flashbacks of my own in the years to come.