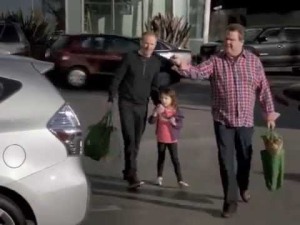 Let me start by saying that my Toyota Prius does exactly what it was hired to do—saves me a bunch of money on gas.  I like that.

Now, you don’t get a Prius to live the life of luxury.  The road noise is a bit much.  I don’t have a luxury version of the car.  Like so many things in my life, I tend to stay in the middle.  So, I’ve got some cool features like satellite radio, GPS, etc. but for the most part, it’s your standard, run of the mill Prius.

This is my second one.  My first Prius was silver, so fairly easy to keep clean. However, there was the Costco challenge: coming out of the store, pushing your cart full of goodies and making a beeline to the first silver Prius you saw, which usually wasn’t the only one in the lot.  I remember once pulling up, hitting my keys, the door not opening and then after a moment, realizing I was standing next to the wrong one.

To make matters worse, a guy pulled up in his car, rolled his window down and yelled, “I saw that! HA!  I did that the other day with HER car!”  As his wife embarrassingly slunk down into her passenger seat.

So, when the time came to get a new Prius (or “re-up” as they call it in the lease business) I decided to go with a more unique color. Behold, a dark, smoky gray…almost black.   It had more bells and whistles and, most important, it wasn’t silver.

Last week, I left Costco with just a couple of photos I had picked up, approached my car, hit the key chain, heard the beeps, opened up the back door and tossed in my pictures.  Just as I was closing the door, I noticed something odd: there were peanuts on the floor.  I didn’t have peanuts in my car.  I took a step back.  And sure enough, it was another black Prius.  In what must have been overwhelming odds, someone else walking to their car hit their open-door beeper at the same time I hit mine. I just assumed it was to my car.  This Prius owner had left his doors unlocked and I had almost hopped into the wrong vehicle.  Again.

So you know, if you own a Prius, you can never relax.  The second you don’t think about it, you could end up in the wrong car.

But all I have to do is keep remembering—I’m averaging 50 miles to the gallon.  My Prius makes it all worth it.