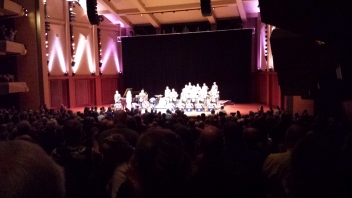 Benaroya Hall opened up in Seattle in 1998, at a cost of $120-million. I can’t believe I had never been to a concert there.

The first was an amazing performance of music that included a knock0ut version of “El Fortuna.”   Now, I know classical music like the back of Morgan Freeman’s hand.  We had bought the tickets at an auction when no one else was bidding and I knew that Victoria and I would be treated to a live performance of the music that has found it’s way into more movie trailers than any other music.  Here’s what the music sounds like.  Recognize it?  Now imagine that performed live with an amazing symphony and live choruses.

Then I saw on Goldstar.com a chance to buy tickets to see the Glenn Miller orchestra play there for half price.  I grabbed four tickets, invited the in-laws and off we went to another night on the town.

One of the cool tricks to know about is that if you get there early enough, there’s a Wolfgang Puck restaurant right in the lobby of the performance hall, where you can get parked and then enjoy a very nice dinner for a reasonable price.  If the show starts at 7:30, I’d get there around 6.  That’ll usually get you into the connected parking garage as well.

Now, back to the Glenn Miller orchestra.  First off, while I was born over 20 years after Glenn died, his music defined a generation and was no stranger to the house where I grew up.  The orchestra, in their matching blazers, performed each of his hits for the next two hours (with a short break) and reminded me of just how many Glenn Miller songs I know.  If you never saw “The Glenn Miller Story” with Jimmy Stewart, it’s well worth the 90 minutes and will give you a better idea of why his music was so unique and forward for its time. Glenn innovated and took chances, leaving behind a sound.  Music is one thing, anyone can do that.  But to create a sound that six decades later defines the time, that’s pretty impressive.

A female soloist would occasionally come out, the animated band leader reminded me a bit of what I would have expected Glenn Miller to act like, and several members of the orchestra and the female singer teamed up to create a “Modernaires” sound for several of the songs. (Look it up on Wikipedia)

Before the show, the band leader asked all of the veterans in the audience to stand and there were a lot.  Again, this was their music, from their time.  I couldn’t help but wonder what it would have been like to be listening to these songs, while the world was at war and your future so uncertain.  As you’d hear about some guys who you went to high school not coming home.  The bobby sox, the saddle shoes, the hairstyles, the times… 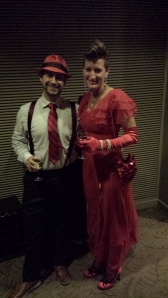 The Glenn Miller Orchestra brought in all ages

The Benaroya time machine had taken me back to earlier times twice in a week.  Two tremendous experiences.  And the most encouraging thing, especially at the Glenn Miller show?  The large number of teens and twenty-somethings that came to hear “Moonlight Serenade” and “Pennsylvania 6-5000.”  It gave me a feeling of just a little more hope.