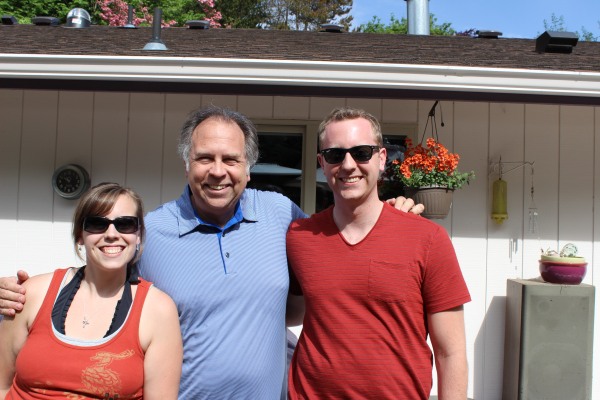 Me and the little ones.

Father’s Day weekend means new barbecues, cards and giving the old man a day of pampering, or at least the semi-royal treatment.  I actually look forward to the day because it’s when you’re not supposed to help with or people get mad.  It’s just one day a year and I’ll take it.

The other day, some voices on the radio were talking about fatherhood and asking themselves, “Was I a good dad? How’d I do?”

I’m not going to give myself the highest grade possible, but for the most part, I’m proud of the way I handled it and really, was the kind of dad I wanted to be.  That turns out to be the secret.

For new or recent dads who are actually worried about what lies ahead–relax.  So much of it comes naturally. You’ll make decisions based on what your parents did and if “it was good enough for me, it’s good enough for them” or  you’ll think “I’m going to do this better.”  Either way, you’re writing a story that’s tens of thousands of pages long, that no knows how it will turn out.  You will make mistakes.  You will learn things and continually get new perspective from the other side of what it’s like to raise kids.

I’m extremely proud of my two kids, mostly because of what they became–themselves.  To me, a parent’s role is to help shape and steer a child towards independence and becoming their own person.  I know from my experience that letting go can be the hardest thing you’ll ever do.  If you define caring for your child as anticipating the need of being there for them, they’ll never learn to stand on their own.  They have to trip and fall.  They need to experience failure and disappointment. They have to have a bully at school pick on them when you’re not around.  There will be teachers they don’t get along with as much as co-workers in the years ahead. Be there as the safety net, not the main support, or when you’re gone they won’t be able to stand by themselves.

Did I ever let my kids down? Absolutely.  I could easily come up with a top 10 list of times I felt that way, from being out-of-town for Tyson’s Pinewood Derby race with the Cub Scouts to oversleeping during my afternoon nap once and not picking up my two kids at school until 4, as they waited in the office, wondering where I was.

As weird as this may sound, I was blessed most of my radio career with a job that required a 2:20am wake up.  Sure, I lived my life pretty sleep-deprived.  But it allowed me to be there when most parents were still working.  I coached or assistant-coached all of their soccer, baseball, softball and basketball teams, from 4th grade through high school.  There was a time when I decided the epitaph on my headstone should be, “He spent too much time with his kids” because I wouldn’t have it any other way.  Perhaps it was the amount of time I spent  with them growing up that made it was easier for me to let go.  From those years of pre-school, elementary school and the beginning of the break-away in junior high,  to the high school years of in the door for a few minutes and then gone again.  Both kids followed my lead, heading out-of-state for college, wanting to demonstrate they could do it on their own.  Yet, both have settled (for now) in the area.

Was I a good dad?  I’m not one to pat myself on the back and I was far from perfect but I would like to think I’d get a passing grade.  I was fortunate to have a great dad and so, I was happy to keep the family tradition going. There is no one way to be a father, but you’ll know if you’ve done things right when a Father’s Day rolls around and you find yourself chatting and getting caught up with some adults whose little hands you once held.  I remember as many of their days growing up as I can.  There really are lots of great stories. They are life’s treasures.

And I am a rich man.

One thought on “Being A Dad”