On paper, I’m sure members of the Seafair Committee thought this would be a brilliant way to call attention to Seattle’s long-standing summer celebration.  I can hear it in the brainstorm meeting:  “We’ll have celebrity racers, get into aluminum boats with motors and have them do their own version of the hydro races!  Brilliant!”

So, when KOMO Radio’s Larry Nelson was asked if he wanted to participate, he said he would, as long as his partner was his faithful producer, Tim Hunter.

It was a gray, overcast Seattle summer Sunday (Sunday! Sunday! Sunday!).  The rules were simple.  One celebrity in the boat, the other at a start line.  A start gun would fire, I would run down, push the boat into the water, hop in and Larry would man the motor.  We had a simple course–just out and around a couple of buoys and back.

In the first heat, we smoked the competition.  I pushed Larry and the boat out, hopped in and Larry cranked that little as we flew across Lake Washington and back to the finish line.

That amazing performance put us in the finals and we could smell victory.  I wondered if we had impressed hydroplane racing legend Bill Muncey with our performance.  No matter.  It was time to really dig deep, to show our stuff, to show the small gathered crowd who the real champions were.

Everyone was set.  I stood at the start line, Larry was in the boat, the gun sounded and the championship heat was underway.  In my eagerness to win, I pushed the boat out hard and just did a backflop in the boat so I could get in quickly and Larry could give it the gas.  Unfortunately, my plan wasn’t perfect, because as I flopped in, the boat tilted; the boat tilted, Larry lost his balance.  The only thing he was holding on to was the throttle, which he cranked as we tilted. That sent it directly into a collision course with KOMO TV’s Ruth Walsh and Harry Sloan.

You can see my foot sticking out!

I don’t remember much about it, because it happened so fast.  There was the clunking of aluminum colliding, the rev of the motors and then silence.  As I looked around, I found myself in water, underneath an overturned boat.  I had air to breathe, and knowing that there were spinning props out there somewhere, I was in no hurry to poke my head out.

Of course, by that time, everyone else had come up and was walking to shore when they realized I was nowhere to be seen.  After a couple of minutes where I was relieved but the crowd panicked, I left the safety of the boat and came up to see the others.  We walked to shore to the applause of the crowd, soaking wet and not really fully realizing yet what exactly had happened. 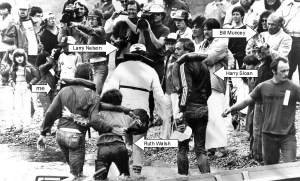 If you’re wondering why they didn’t do this again, blame us!

I believe it was a guy named Dennis Law who took these pictures and mailed them to us.  Larry’s widow, Gina, came across them the other day and thought I might enjoy having them.  Thanks, Gina!  Amazingly, not a single person was injured in that mishap.  It was the first and only year Seafair did that event and I can say I was there.  Better yet, I can say, “I survived it!”