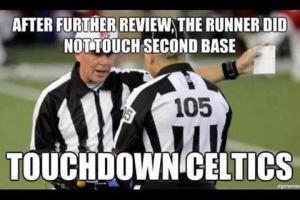 I was excited when it came time for Seattle to shine on Monday Night Football and shine we did.  The weather was awesome, the scenery beautiful, the team inspired.  At halftime, I couldn’t believe we could have sacked Rodgers 8 times.

I’m a Seahawks fan and for those from outside the area, we agree: the officiating was horrible.  We’re spinning the touchdown call as best we can to accept it and move on.  It was an unlikely win and, perhaps, a questionable one.  But the final score is the final score.  The NFL even officially backed that up.

Now, to be clear—Seahawks fans don’t suddenly feel better about themselves because of the outcome of this game.  Play a rematch next week and our defense may not be as tenacious.  Rodgers would be hot from minute-one, instead of waiting until the second half to throw those 2-second passes.

Let me help you understand.  The reason Seattle is OK with taking the win is because we have been Packer’d many, many times before, including in a Superbowl.

Go back to our playoff game against the New York Jets, with Vinnie Testaverde fell short of a touchdown, but the referees gave him one.  The replay clearly showed he didn’t make it, but the refs gave him the TD and the game.  Our coach lost his job because of that one.

Get any Seattle fan going on Superbowl 40, our one time at the big dance and blood-pressure immediately goes up. In that game, bad calls didn’t have to be made for the entire game, just enough at the beginning to shift momentum.  It’s easy to say, “That’s sour grapes.” But the official who made those bad calls actually apologized years later and admitted he had blown it.

Again, Seattle was on the short end of the stick.

I went to the doctor today and told him that I wasn’t really there for a piece of glass that was stuck in my heel, but rather to get his opinion on last night’s game.  Dr. Shoup was a team physician for the Seahawks for a decade or so.

I’m going to take his opinion and run with it.  Shoup was on the sidelines at that New York Jets game and yes, he was also there for Superbowl 40.  In his opinion, sometimes those things happen.  It’s over.  Next!

The good doctor recalled one time when he was on the sidelines and noticed one of the defenders at least four yards offside.  He yelled to the ref who replied, “Yeah, I know.” But nothing was called.

People are panicking in the streets, saying these replacement refs are missing a lot of calls that the experienced refs would get.  That may or may not be true.  Did you ever consider that the referees last night were calling more penalties than usual because both sides were pushing the limits, trying to see just how much they could get away with? I know at least two occasions where Seattle players either took a cheap shot or committed something that should have been a penalty, but the zebra stripes only caught the Green Bay player’s reaction and penalized him.

Sorry, Green Bay, for your anger and frustration.

Been there. Done that.