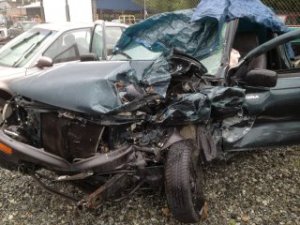 Car accidents suck.  We’ve all had our share of them.  From fender-benders to those with tragic outcomes, we’re all just a distraction away from having our lives suddenly change.

The worst accident I was in happened back in the 1970s.  I was making a beer run with a buddy out by Carnation when he took a turn too wide, caught the gravel and his ’74 Civic rolled.  I remember it all in slow motion, thinking “I’ve got to keep pushing on the roof of the car so my head doesn’t take a hit and I end up a vegetable.”  Some still say I should have pushed harder.  But when we were done rolling, the car had landed on the passenger’s side, my left foot was sticking out the window and somehow I had torn ligaments on the right leg, which left me on crutches for a couple of months.

This past Sunday, there was another car accident in the family.  This time, my brother-in-law Bruce was on his way to church in a Toyota pickup truck when a 20-something apparently was distracted, drifted into his lane and, with nowhere to go, they hit head-on.  Fortunately, it was on a residential street so they weren’t going too fast.  However, the impact was enough to result in totalling the truck (as seen above) and send my brother-in-law into a nearby ditch, on his side.

Bruce says he thought this might have been it.  The last thing he remembered was seeing a truck grill, the impact, the air bag deploying and then sitting there in a truck on its side in a ditch.  From that position, he called his wife to let her know he wasn’t going to make it to church.

Bruce suffered some cuts and bruises, is no doubt going to be one achy fellow for a while and broke his left kneecap.  But considering how trashed his truck looks now, he’s got to consider himself a lucky fellow.

There were also some extra special touches that occurred.  For example, his wife, Bev, never has her cell phone on in church.  She always remembers to turn off the ringer.  But this day she forgot, so she was able to get the call.  Her father had also chosen this Sunday to show up at her church, so he was there to help.  That’s not his regular church.

Then, to complete matters, we have to throw in a little comedy.  When Bruce’s dad got the news, he headed straight for Providence Hospital to be there for his son.  In the confusion of the morning, no one explained that it was the Providence Hospital up in Everett, NOT over in Seattle.  I suppose we should be grateful he didn’t drive to Providence, Rhode Island.

But the best story came when the fire department folks were trying to get Bruce out of the truck.  He was pretty much pinned in, so they had to break out the rest of the windshield so they could get to him.  So that he wouldn’t get cut by the glass, they placed a sheet over him while breaking out the glass.  Of course, when should his wife Bev show up but as soon as he was covered up with a sheet in the truck?  Yes, there was momentary panic, but it was explained to her that he was OK.

Bruce was lucky.   But his busted kneecap adventure is a good reminder to buckle up and be just be a little more paranoid when we’re out there on the roads.  Don’t race that yellow lights, don’t rush to be the first out in the intersection, don’t assume that bozo approaching the stop sign is actually going to stop.

And probably the most important advice: if they’re about to cover you up with a sheet, DO make sure your wife hasn’t just arrived on the scene.

Speedy recovery, oh brother-in-law of mine.