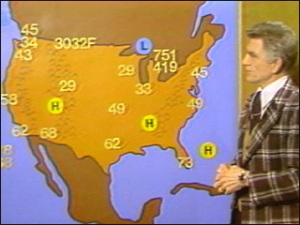 Ray in one of his classic "insincere-sucker suits"

It was around this time of day, if you were to wander around the old KOMO broadcast building, you would venture through the quiet halls of the radio side and see a light coming from the voice booth.  This is the same booth that Don James, Steve Allen, Patty Duke and Tiny Tim had sat in while I interviewed them.  It was after the 5 o’clock and 6:30 news updates and Ray Ramsey would sit there, looking at the newspaper, relaxing until he had to tape some weather cut-ins prior to that 11pm forecast he’d have to deliver.

For a lot of years, it was the routine.  It was how the Puget Sound Area came to know Ray Ramsey as that sly, witty weather guy on Channel 4.

But I knew a different Ray Ramsey.

Because just before 7am every morning on the Larry Nelson show, Ray would check in from his home, sitting in his bathrobe in front of a microphone and tell us about the day’s weather forecast.  Eventually.  For a couple of years, as Larry Nelson’s producer, I was turned loose to come up with some kind of musical or crazy intro to this just-before-the-top-of-the-hour weather forecast and when it was good, it was great.  Larry and Ray would speak as if they were talking in one big living room, a couple of friends passing in the morning, knowing that a forecast of some sort would have to eventually emerge, but in the meantime, there would be clever remarks, bursts of laughter and some of the best, most genuine fun ever heard on the Seattle airwaves.

It was fun to hear him react to the day’s musical intro.  He never knew what was coming. He would drop in a zinger, a one-liner, that lined his brain like a Wikipedia of humor, ready for even the slightest hint of what topic to focus his comedy.  One of the more crazier things I remember him doing is referring to the body of water between Peru and Bolivia. Lake Titicaca.  He’d say it slow and repeatedly…Titi….caca…..as if he knew he was getting away with something, but because it was a real location, they couldn’t get him for it.

In his early Spokane days, he was on the radio as “Hay-head Ray”.  For years, he was the witty KOMO weather guy until the brass upstairs decided it was time to move on…and, when was not exactly ready to hand over the keys to Steve Pool, was forced to retire.

One of the more interesting moments of my radio career at KLSY was when the GM decided we needed a team-building exercise.  So, we gathered at this place and had to create a spaghetti dinner out of scratch.  No money. Figure it out.  One of the tasks was to bring someone famous to the dinner and the PD at the time, Bobby Irwin, lived just down the road from Ramsey.  Between Bobby’s wife being a producer at KOMO and my relationship with Ray years before, he agreed to just give up whatever he was doing and come to our dinner. The wisecracks were ready, he was a huge hit.  I wished him well, noting it was great to see him again.  And it was.

And it was the last time I’d ever see him again.  Now, the news of his passing.

I’ve been fortunate to have some extremely interesting people pass through my life.  Among them, Ray was one of the classics.  He liked to “play the ponies”.   He had sports coats that were so loud, Lady Gaga would ask him to turn them down. He had taken his punches, but rolled with them, all with an admirable way of dealing with them. He was a classic character on Seattle television and unselfishly did everything he could to help out the Lake Titicaca chamber of commerce.

Ray, thanks for your friendship and making people laugh.  After all, it’s why we’re here.

One thought on “Beyond Lake Titicaca”