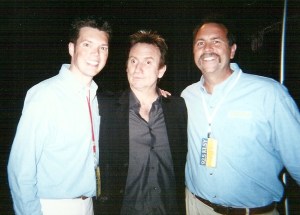 Barry McKay, Colin Hay from Men at Work & Me

It amazes me how powerful a song can be.

The other day I reached into a pile of unmarked CD’s I had burned and decided to see what was on them. The Alanis Morrissette song, “Thank you” began and I was instantly taken away to a very pivotal place in my life.

It’s one thing for a song to trigger a memory.  Play Led Zeppelin’s “Kashmir” and I remember their concert where I pre-functioned a little too much and sadly, woke up to hear just the last song.

“Precious and Few” is one of those schmaltzy songs from the 70’s.  But hey, it was “our” schmaltzy song.  Actually, that triggers memories of a “Sweethearts Ball” my sophomore year of high school, when the girls asked the guys to the dance.  I was insanely in love with the girl across the street, but a classmate asked me to the dance and I accepted to try and make the other girl jealous.  I wasn’t much of a date,  I think she was pretty hurt by the end of the evening and that will always be one of those do-over moments I wish I could correct with help from a hot tub time machine.

When “Thank you” started playing the other day, I found myself back in the Sandusky Broadcasting conference room.  These were the peak days of KLSY, when a young gun programmer from back east had come into our building and breathed incredible new life into the station.  He was getting songs on the air that we had only dreamed of playing or that we heard on the competition and wondered why couldn’t play them.

It was a programming staff meeting, so everyone was there. Barry McKay, our boyish-looking program director, was very excited to start the meeting with a VHS of Alanis Morissette’s new music video, “Thank you”, he had taped the night before.  It had some daring scenes, even a covered but naked shot of the singer and Barry was just thrilled on how “cutting edge” it was.    As I heard the song playing in my car, I can clearly remember the video, the reactions of the people around the room and my inner voice telling me that, as a station, we were finally on the right path.

After launching as a “soft rock” station in the early 80s, KLSY eventually found itself of being no one thing.  If you wanted soft music, there was WARM.  If you wanted pop music, there was STAR.  KLSY had the fun personality of star, but the soft music of warm, but with a little of the STAR music thrown in. It was like the friend too eager to please, who tried to do everything to make you happy, rather than just being himself.

Barry finally had the the place on a new direction.  Truth be told the ratings he delivered in the Winter Arbitron that year were the highest we’d seen in years and were enough to beat STAR.  Like I said, we were on a great path and you could feel it in the building.

But not everyone likes success, especially if they’re not a part of it.   So, one day, Barry and our Marketing Director, Scott Paine, exchanged emails about the station, playing the “what if” game–how we could be stronger, what staff changes would need to be made, etc.  To this day, I still have no proof who did it, but one of those “out of favor” staff members went back to Barry’s computer, browsed through his email (yeah, Barry didn’t password protect his PC) and when he or she read that email exchange, decided to forward it along to ALL STAFF.

The results were as you’d expect.  There was apologizing, IT was called into action and wiped it off as many machines as possible.  Since I worked in the morning and this happened in the afternoon, I never did actually see the email.  But our GM was among those not amused.  He didn’t like all this planning going on without him knowing about it, especially when one of the staff he was friends with would have been on the chopping block.  Barry kept his title, but lost all power in music choices. The relationship between Scott and the GM became strained and both Scott and Barry were gone within a year.  As in fired.

KLSY went back into it’s in-between, safe existence.  One that pleased, but didn’t demand loyalty.  Oh, there were the fans and I can’t tell you how many have come up to me over the years and said how much they missed the station, or our morning team, especially Alice.  But non-committed broadcasting has a price and, in time, the station paid for it. But we were there, we were SO close. It’s a shame that one person’s bitterness was allowed to launch a ripple effect that destroyed several careers and ended the life of a 20-year old radio station.  However, I can either choose to live as a victim or to remember those “golden months” of the place I called home for 19 years in a positive way, which is exactly what I do.

Every time I hear that song,  I go back to watching the video in the conference room, I see the genuine enthusiasm in the eyes of the Program Director and the team that was ready to win. And I was lucky enough to have been a part of it all.  I guess that’s why I like to go back there, but strangely, it’s only when I hear that song.

No, Alanis. Thank YOU.