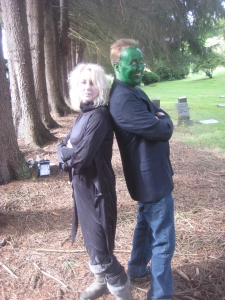 I was driving through Europe in an Opal that the family had rented, listening to European radio, back in the late 1990’s.  While not all the songs were in English, one I had never heard before, was.  It was a catchy tune that during our week stay, I heard several times.

When I returned to the states, of course, no one had heard of this song that included all these women’s names.  A couple of months later, finally, it hit the U.S.:  some guy named Lou Bega, singing “Mambo Number 5”.

It was ripe for parody and while most went the way of the Clinton/Lewinsky scandal, I was inspired to take it a Halloween direction.  Every year on KLSY, we’d dig it out and play it and for a brief while, it was a holiday tradition for the listeners each year.  Of course, as radio began it’s descent into sterile, safe, only-well-tested programming, it was the song we’d have to sneak on the air when we hoped the PD was still sleeping or out of town.

After “retiring” from radio in 1993, I developed a tradition of putting the song into mixed CD that also included “Monster Mash” along with haunted house sounds and then looped it so it played for the trick or treaters as they came to the house.

Earlier this year, I decided it would be a perfect song for my first music video.  So I recruited women who would dress up like zombies, tagged my buddy Scott Burns and his lovely wife April and my stepson Nick and together, one Sunday, we shot all the scenes we needed for this piece and then some.  I have some out-takes I’ll eventually put together, but the bottom line, I did it. I made it happen, despite several technical challenges.

Couple of trivia notes about the project: 90% of the scenes were shot on a brand-new Flip video camera.  Also, my sister Debbie noticed that “Bimbo #5” was actually included on the Wikipedia page for the original “Mambo #5”.  I didn’t know that until this week.

So, enjoy my passion project.  Ladies and Gentlemen, I give you, Bimbo #5.