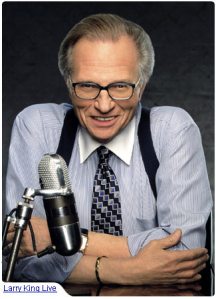 Larry King is getting another divorce.
For those of you keeping score, this is the end of marriage #8. The guy has been down more aisles than a grocery cart!
Now, in Larry’s defense, he did marry the same woman twice, so he’s really only had 7 failed marriages. It’s just so happens that that one of them was a two-parter.

And 7 losses is just one more than the Mariners already have this season (at the time of this writing).

How do you get married 8 times? It’s like getting caught in the same speed trap 8 times, not remembering, “Oh yeah, there’s that cop with a radar gun up ahead!”

Can Larry King really be THAT oblivious? That cavalier? Just “keep the divorce lawyer in my speed dial” and live life?

All of these failed marriages have taken quite a toll.  Take a real close look at Larry and you can actually see the rice marks on his face! I’m thinking Larry is a lot like the dog in “Up!” But instead of yelling, “Squirrel!”, he sees a pretty girl and thinks, “Wife!”

It’s not too late. America, it’s time we take Larry King in to the vet and have him neutered.