Victoria and I went to Tim Burton’s “Alice in Wonderland” tonight. What did we think? Loved it.
But what about everyone else? Including you?
Well, over the years, I have a checklist that helps me determine if a movie is a hit. Here’s what I look for….
1) Did the audience applaud when the movie was over?
This was a big “YES”.
2) Would I buy it when it comes out on video?
Another big YES.
3) Did I look at my watch during the movie and if so, how far into it?
Never even looked at it even once.

To me, this was a no-brainer. You like Tim Burton/Johnny Depp movies or not. The critics that gave this movie less than great reviews complained there wasn’t enough character development. Hello? Somehow, I hope you might have stumbled across this classic story before. This is actually based on the 2nd book, after Alice’s first visit and it follows the story pretty closely. Add Tim Burton’s touches, fun special effects and a great cast and it’s pretty hard not to like this movie.  Go.  Escape for a couple of hours.  Reality will be waiting for you when it’s over.

By the way, the line to the movie went down the hall, out into the lobby, down a flight of stairs and down into the next lobby.

However,  there will be those who won’t like this film. To all of you, in the words of the Red Queen: “Off with their heads!” 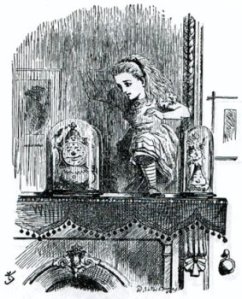