That seems obvious, but it really hit home how long ago that was when I had lunch with a fellow named Bill Wright.
I met Bill back in 1993 when a friend of a friend recommended me to get involved in his project. Bill wanted to create audio books out of the Wizard of Oz series.

The cover of the first audio book we recorded

Now that statement may be a bit of a surprise to many. Yes, there were a series of Oz books, that started with L. Frank Baum’s novel that became Judy Garland’s classic movie. Baum went on to write 13 more books, approved authors carried the series another 26 stories deep.
But I digress and quite well, thankyou. 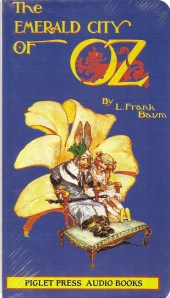 I joined local radio voice Debbie Deutsch, who did the narration, along with a 12-year-old actress named Alexandra and together, we recorded two of the books. That meant many an evening and Sunday recording session for week after week.
But with the meticulous audio work of a great guy named Bob Major, the books came to life in audio form. At that time, cassettes were all the rage.
So, years later, I’m wondering whatever happened to Bill and those recordings and if there’s any chance the digital masters still exist.
We both have traveled down some diverse roads since those days. I’m still in touch with Debbie Deutsch….I have NO idea whatever happened to Bob or Alexandra….but the good news, the digital copies exist and we should be able to get them into CD or Itunes form.
Bill and I both looked at each other for a moment when we rendezvous’d at the Olive Garden in Kirkland. We had to process: is that what he would look like 16 years later.
The lunch was awesome, we chatted and talked possibilities and a project that easily could have just faded away has new life.
I’ll keep you posted. But what a heck of a reminder of just how long ago 1994 really was…

Bill & Tim meeting up for the first time this century