When I first in Seattle back in the 70s to go to school, I had an instant connection with Seattle. It just felt right to live in a place where cedar trees were everywhere, where people were friendly and while it occasionally rained a little too much, I always said it was the reason the air was so clean here.
I’ve been proud to call Seattle home, but never more proud than this past Saturday night at the Conor Byrne Pub in Ballard, a highly-Scandinavian Seattle suburb.
My wife Victoria and I had managed a get together with the folks who introduced us, Jaley and Bruce Fulton. We had stumbled across an annual festival put on by the Seattle Weekly called “Reverb”, where you bought a wrist band and that allowed you to take in all kinds of bands all over town. I’d guess 25 or so during the course of the evening.
As we passed by Conor Byrne, we noticed on their sign that one of the “Upcoming Acts” was a mayoral debate. Really? The two guys running for Greg Nichol’s seat were coming HERE for a debate? We decided to set up camp at the end of the bar, not too far from the stage and less than three rounds of drinks and a couple of sandwiches later, the two candidates sat there, being asked questions by two the Seattle Weekly folks.
It was one of the most fun things I’ve seen in a long time. The questions ranged from the outrageous to the ridiculous, with occasional hints of relevancy to the campaign. But mostly, this was two candidates of Irish descent putting themselves up for public display and occasional harassment. Both were semi-at-ease, but played along well.
The questions ranged from–are you ready?–“If you had half a boner, which city council member would you think of to get rid of it?” to “Are you going to bring back the waterfront trolley?” Each candidate was given one minute to respond. If they wanted an extra minute, they had to do a shot of Jameson Irish Whiskey. Joe Mallahan had two shots during the course of the debate, Mike McGinn didn’t have any.
It has saddened me to see how divisive politics has become in this country. I guess I’ve been around long enough to remember how President Reagan, a Republican, and House Speaker Tip O’Neal, a Democrat, would lock horns on politics…but then put it all aside and have a beer together afterwards. You should be able to have a different opinion and not vilify those with a different view.
On this night, I saw two candidates with different backgrounds and political styles, vying for the top job in Seattle and doing shots of whiskey. A few political points were made, but mostly, it very much demonstrated that we have an election on our hands by two candidates that get it.
May the better one win.
As for Seattle politics, we’ve already won. 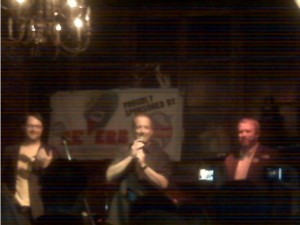