If you didn’t hang with the neighbors last night, you missed it. It’s every August 4th, if you want to write it down on the kitchen calendar. It’s a chance to gather at a neighbor’s house and meet all the folks who live in your area.
In my old Bothell neighborhoods, I pretty much knew most folks. But maybe it has to do with the city life that people don’t take the time to meet the people around them. I know we’re pretty much pull into the driveway and go inside until it’s time to go back to work.
So, I thought I’d share some of the pictures from the night. Met a couple of neighbors who were former schoolteachers…several neighbors who “summer” in Seattle, but head south during the winter…..there was a director of a local film festival….a groundskeeper for the Mariners with lots of stories to tell. It was awesome.
I’ll be the first to tell you, I’ve never done one of these before. But if you live some place where you don’t know at least a couple of neighbors, your August 4th, 2010 is already reserved. 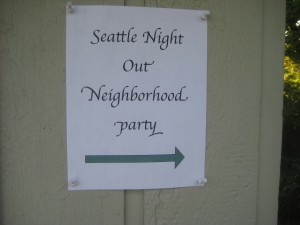